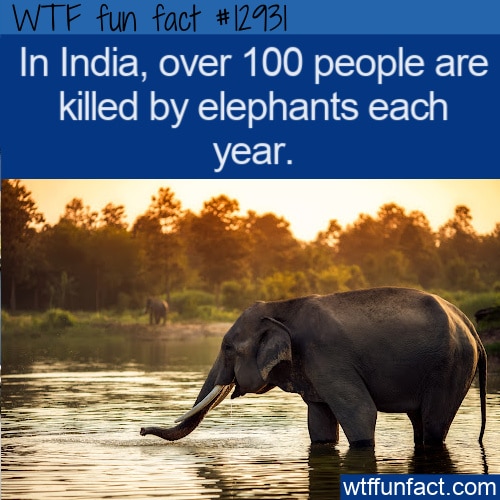 If you live in certain parts of India and encroach on the increasingly small amount of land where wildlife still rules, you could be one of the 100+ unlucky people to be killed by an elephant each year. In fact, a woman in India was killed by an elephant in January 2022 and witnesses say it returned to her funeral and trampled her corpse.

Typically, elephants are empathetic creatures, but as their land is increasingly encroached upon, they can be dangerous.

Killed by an elephant in India

Elephants typically keep to themselves. But as building and other types of habitat destruction increase, some small farmers are forced farther into elephant territory to find land to grow food. There, they can have their crops trampled or be killed by a single elephant or group of elephants that feel threatened.

According to the World Wildlife Fund (cited below), over 100 people are killed by elephants each year in India “over 200 people have been killed in Kenya over the last 7 years.”

The WWF notes that “Elephants are often killed in retaliation. Wildlife authorities in Kenya shoot between 50 and 120 problem elephants each year and dozens of elephants are poisoned each year in oil palm plantations in Indonesia.”

Perhaps one of the most popular (albeit unconfirmed by official sources) incidents involving an elephant in India happened in January of 2022.

“On June 10, 2022, the woman named Maya Murmu, who hailed from Raipal village in the district of Odisha Mayurbhanj, was brutally attacked by an elephant in a nearby forest while collecting water.

According to news reports, she was rushed to the hospital where she was pronounced dead very quickly after.

After bringing her body home, her family proceeded to make the necessary arrangements for her funeral, but it was all for nought as on the day of her funeral, the very same elephant returned to the village in an extremely foul mood.”

In Odisha, elephant attacks are slightly more common due to their proximity to the creatures. But this is very atypical behavior. While some people insist the woman was assisting poachers in threatening baby elephants or throwing stones at the creatures, there’s no legitimate evidence of that.

However, there are multiple reports that “the elephant then proceeded to attack the funeral and targeted Maya’s corpse, trampling it furiously before letting out a roar that signalled other elephants from its herd to wreck the rest of the village. The same elephant also somehow managed to identify Maya’s home, and went on smash it, killing the goats living there.

By the end, nearly the entire village had been wrecked, and many of the inhabitants had lost their homes (although thankfully, no one else was hurt).”

Indian newspapers have reported it, but local authorities have yet to directly confirm the specifics.

It’s hard to know what to believe in these cases, but it’s clear that elephants are capable of getting pretty angry under certain circumstances. — WTF fun facts