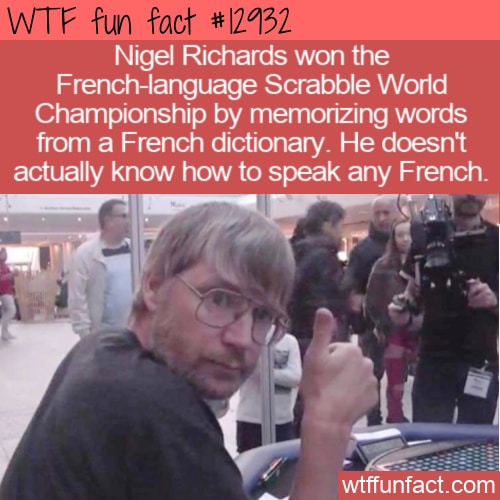 Nigel Richards is from New Zealand. He’s a worldwide Scrabble champion, but his most impressive feat may just be winning the French-language Scrabble World Championship without actually knowing how to speak French.

If you’ve ever tried to learn a language, you know that there are two parts to success – grammar and vocabulary. You can be great at grammar, but if you can’t memorize new words then it doesn’t do you much good. Equally, you can know lots of vocabulary words, but if you can’t put them together in a sentence (or even pronounce them), you can’t actually speak the language.

Before trying his hand with French, New Zealander Nigel Richards won a couple of English-language Scrabble championships. But that clearly wasn’t enough of a challenge. That’s when he decided to tackle French.

But when you’re playing Scrabble, grammar doesn’t matter, only the words in the dictionary do. So Richards decided to try and memorize as many words as possible from the French dictionary.

Clearly, he did a great job, because he beat all of the actual French speakers in a 2015 tournament.

Richards obviously has an impeccable memory. After all, there are 386,000 words in French Scrabble and only 187,000 in North American Scrabble.

Scrabble expert Stefan Fatsis told NPR: “Basically, what he does is, he looks at word lists and looks at dictionary pages… he can conjure up the image of what he has seen. He told me that if he actually hears a word, it doesn’t stick in his brain. But if he sees it once, that’s enough for him to recall the image of it. I don’t know if that’s a photographic memory; I just think it’s something that his brain chemistry allows him to do.” — WTF fun facts