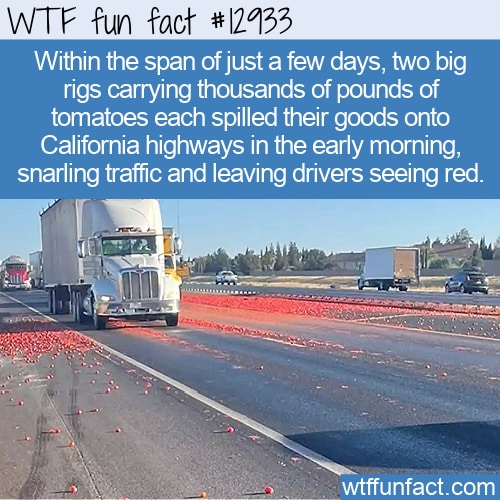 It’s never fun to see a highway spill. You just know someone is in big trouble for letting a product spill out of their truck and onto the roadway to snarl traffic. But we couldn’t help but at least stifle a bemused “oops” when hearing about two California highway spills – partly because it just seems so absurd.

Granted, we doubt it was amusing to any of the drivers – or the people in need of tomatoes those days.

On August 30, 2022, a truck crash resulted in part of I-80 in Vacaville, California spilling its load of 50,000 pounds (!) of fresh tomatoes all over the highway on a Monday morning, disrupting traffic for hours.

The California Highway Patrol said the truck transporting the tomatoes crashed into another vehicle near an offramp. This caused the truck driver to lose control and hit the center divide and spill hundreds of pounds of tomatoes across the lanes. While drivers tried to maneuver around the mess, they also crashed into each other, creating an even bigger traffic disaster (we’re just guessing – but gawking while driving probably played a role here).

While the driver of the truck and two other people were treated at a local hospital, no major injuries were reported at the time.

By sheer coincidence, the same thing happened again a few days later on another California highway. And we can only imagine the California Highway Patrol’s reaction when they got the call. Did they think they were being pranked?

According to Trucker’s News (cited below): “For the second time in a week, a tractor-trailer spilled a large load of tomatoes on a California highway. On Friday, Sept. 2, a load of tomatoes covered the southbound lanes of Interstate 5 in Elk Grove near Sacramento. The California Highway Patrol reported a trailer loaded with tomatoes detached from a truck around 7:45 a.m. PDT. There were no injuries reported.”

The two California highway spills took place about 50 miles away from one another. Considering just how big California is, that’s quite a coincidence.

A Sacramento Bee story on the crash by Michael McGough was full of puns on the messy coincidence:

“Running late in morning rush-hour traffic? Time to ketchup.
For the second time this week, a truck carrying tomatoes spilled on a Northern California freeway near Sacramento, painting the roadway red and causing delays.
A trailer carrying the fruit detached from a truck around 7:45 a.m. Friday on southbound Interstate 5, south of Elk Grove Boulevard, according to the California Highway Patrol’s online activity log.“

We’re glad no one was hurt and just hope this doesn’t lead to a BLT shortage in the area. — WTF fun facts

Source: “For 2nd time in a week, large load of tomatoes spilled in California” — Trucker’s News