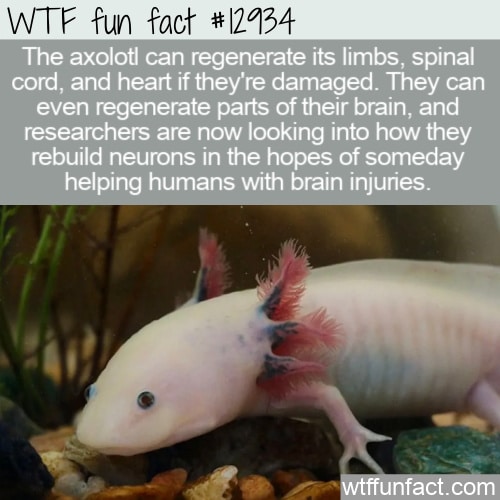 In an amazing evolutionary feat that we wish were available to many of the humans we know, it turns out the salamanders known as axolotls can grow back parts of their brains. Axolotl brain regeneration is just another one of this creature’s amazing regenerative abilities.

According to IFL Science (cited below), the initial discovery is an old one:

“The axolotl (Ambystoma mexicanum) is an aquatic salamander renowned for its ability to regenerate its spinal cord, heart and limbs. These amphibians also readily make new neurons throughout their lives. In 1964, researchers observed that adult axolotls could regenerate parts of their brains, even if a large section was completely removed. But one study found that axolotl brain regeneration has a limited ability to rebuild original tissue structure.”

At the Treutlein Lab at ETH Zurich and the Tanaka Lab at the Institute of Molecular Pathology in Vienna, researchers are trying to figure out just how complete axolotl brain regeneration is. For example, one question is what types of brain cells are they able to replace?

One of the authors of a recent study noted in IFL Science that looking at brain cells was the key to understanding the regenerative process:

“In our recently published study, we created an atlas of the cells that make up a part of the axolotl brain, shedding light on both the way it regenerates and brain evolution across species. Why look at cells? Different cell types have different functions. They are able to specialize in certain roles because they each express different genes. Understanding what types of cells are in the brain and what they do helps clarify the overall picture of how the brain works. It also allows researchers to make comparisons across evolution and try to find biological trends across species.”

The research team uses a specific type of RNA sequencing to get snapshots of brain samples. More specifically, they focus on the telencephalon (the region that contains the brain’s neocortex – the seat of behavior and cognition). The cells in this area are highly diversified.

By identifying the genes that are active when cells such as neurons replicate or turn into other cell types, the researchers can get a sense of how more mature cells form in the axolotl’s brain form over time.

The real test comes when the researchers inflict an injury on part of the brain, damaging some cells, then checking in later to see if they’ve regenerated.

And they found that in about 12 weeks, most of the axolotl’s brain cells have been replaced by new ones. The cells even reformed neuronal connections.

Even if you don’t care about axolotls, the research is important for the future of human brain research. There are many diseases that affect cognitive capacity (not to mention the role of aging on the brain). Understanding the process by which the axolotl’s brain regenerates could someday help up apply this knowledge to humans. — WTF fun facts

Source: “Axolotls Can Regenerate Their Brains – These Adorable Salamanders Are Helping Unlock The Mysteries Of Brain Evolution And Regeneration” — IFL Science