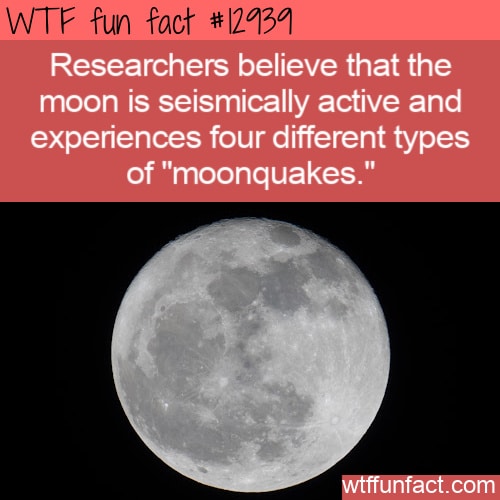 We’ve all heard of earthquakes, but it hadn’t really occurred to us that seismic activity would occur on other celestial bodies. Now that we think about it, it makes sense. And, of course, they wouldn’t necessarily be called “earth”quakes. On the moon, they’ve named them “moonquakes.”

In 2006, NASA (which is cited below) reported that a Notre Dame professor named Clive R. Neal (who was an associate professor of civil engineering and geological sciences – the department has since changed its name a bit) came to a surprising conclusion.

Neal and a team of 15 other researchers looked at data from the Apollo mission, and told scientists that the data pointed to something interesting. At NASA’s Lunar Exploration Analysis Group (LEAG) meeting in League City, Texas in October 2005, he announced that “The moon is seismically active.”

That might not seem important because: 1) the team was never on the moon themselves to feel a moonquake, and 2) it’s not like buildings are going to come crashing down if there’s a huge moonquake. However, people like Elon Musk are talking more and more about building structures on the moon and increasing human activity there. If that happens, structures will have the be built to stand up to moonquakes (which we don’t know all that much about).

Types of seismic activity on the moon

According to the research team, there are at least 4 different types of moonquakes (revealed by the data they assessed):

(1) deep moonquakes about 700 km below the surface, probably caused by tides
(2) vibrations from the impact of meteorites
(3) thermal quakes caused by the expansion of the frigid crust when first illuminated by the morning sun after two weeks of deep-freeze lunar night
(4) shallow moonquakes only 20 or 30 kilometers below the surface.

The team said: “The first three were generally mild and harmless. Shallow moonquakes on the other hand were doozies. Between 1972 and 1977, the Apollo seismic network saw twenty-eight of them; a few ‘registered up to 5.5 on the Richter scale,’ says Neal. A magnitude 5 quake on Earth is energetic enough to move heavy furniture and crack plaster.”

The last thing we want to hear if we decide to visit the moon is that any event out of our control could be a “doozy.” And these shallow moonquakes sound potentially deadly:

“Furthermore, shallow moonquakes lasted a remarkably long time. Once they got going, all continued more than 10 minutes. ‘The moon was ringing like a bell,'” Neal said.

Imagine the insurance premium on that moon house!

What else is interesting about moonquakes?

While we have plenty of aftershocks on Earth, earthquake vibrations from individual events usually last around 30 seconds – or 2 minutes, tops. That’s because of something called chemical weathering (as Neal says) – energy moves across minerals in the earth, and those deaden the vibrations relatively quickly. Not so much on the moon:

“The moon, however, is dry, cool, and mostly rigid, like a chunk of stone or iron. So moonquakes set it vibrating like a tuning fork. Even if a moonquake isn’t intense, ‘it just keeps going and going,’…And for a lunar habitat, that persistence could be more significant than a moonquake’s magnitude.”

Moon structures will have to be built of flexible materials so that they can move with the vibrations (that way they don’t crack). But first we need to know a lot more about engineering details like the maximum fatigue threshold needed so we can build those materials. — WTF fun facts