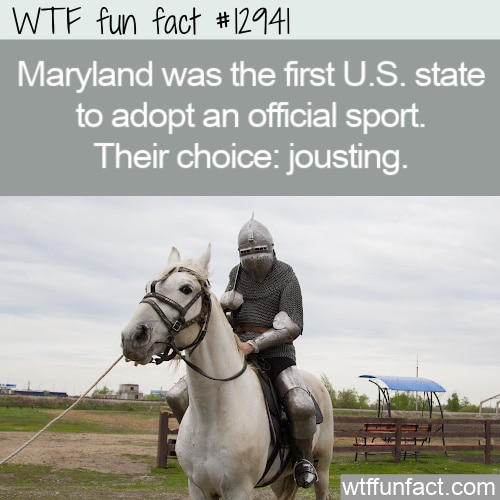 On June 1, 1962, Maryland became the first U.S. state to adopt an official sport. And you may be totally confused by its choice. That’s because jousting is Maryland’s state sport.

Why on earth is jousting Maryland’s state sport?

For most of us, it seems like an odd choice. But if you explore the Maryland State Archives, you’ll see that “jousting tournaments have been held in Maryland since early colonial times but became increasingly popular after the Civil War.”

And they never really stopped jousting in Maryland. According to The Culture Trip: “The pageantry is not lost in modern-day tournaments. Men (referred to as knights) and women (referred to as maids) are dressed in colorful costumes full of regalia and many of the medieval customs and practices are still utilized. The Maryland State Jousting Championship is held annually and has been sponsored by the Maryland Jousting Tournament Association since its founding in 1950.”

Ok, so we just have to chalk our surprise up to ignorance. But in all fairness, they should really televise that stuff widely.

States that want an official anything – whether it’s a bird, song, flower, or sport – need only propose a bill and have it passed by their state government. Not all states have an official sport, but we’re sure some followed in Maryland’s footsteps (though they didn’t pick jousting).

For Maryland, the whole thing was apparently a no-brainer. In 1962 “Henry J. Fowler, a member of the Maryland House of Delegates from St. Mary’s County, introduced a bill during a session of the Maryland General Assembly to establish jousting as the official state sport. The bill passed both houses and was signed into law by Governor J. Millard Tawes.“

Today’s jousting competitions in Maryland are held throughout the state and abide by rules created in 1950. It’s a non-contact sport “where competitors on horseback with lance in hand try to spear hanging rings of various sizes while quickly riding by three arches. Rings, ranging in diameter from one-quarter of an inch to approximately two inches, are hung nearly 7 feet off the ground.”

Tournaments take place between May and October