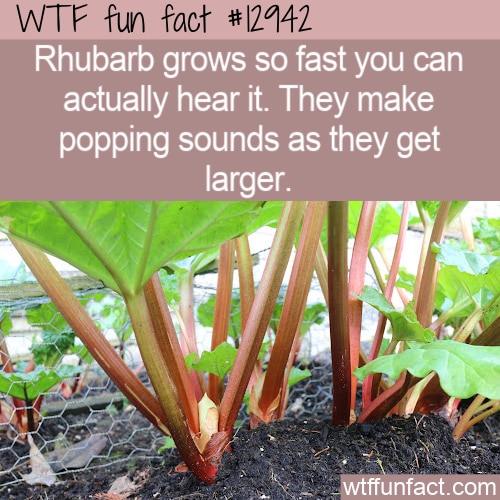 When we plant something, it feels like it takes forever to start growing. But that’s not the case with rhubarb. Once this vegetable gets going, it can develop so fast you can hear rhubarb growing.

How to hear rhubarb growing

According to Atlas Obscura (cited below), this is mostly the case with forced rhubarb – the kind you give a little extra effort to in order to get it to develop faster.

“Forced rhubarb, which is made to mature in near total darkness, grows at such an alarming rate—as much as an inch a day—that it actually makes squeaks, creaks, and pops as it gets bigger. It makes for sweeter rhubarb, growers say, and sick beats.”

Of course, if you’re forcing rhubarb to grow in a facility, it can be hard to hear over the sound of any machines you have running to keep the conditions ideal.

Atlas Obscura states that “The method of growing forced rhubarb dates back to the early 1800s, and continues in much the same way today. Farmers let the rhubarb grow out in the open for two years, as the roots collect and store calories. Then the plants are transplanted to lightless growing sheds around November, where they continue to grow—warm, but out of season and in the dark. The rhubarb grows without photosynthesis, which normally makes the plant tough and fibrous…The process also results in deep, red stalks, without the normal green shading.”

The loudest noise you’ll hear is the forced rhubarb bursting out of its bud with a pop. Then, it makes a fainter noise as the stalks rub up against each other and squeak. That’s because forced rhubarb isn’t planted far apart.

There aren’t many forced rhubarb growers anymore, though you can still find some in Michigan and Washington state if you want to hear a vegetable grow. — WTF fun facts

Source: “Listen to the Sick Beats of Rhubarb Growing in the Dark” — Atlas Obscura