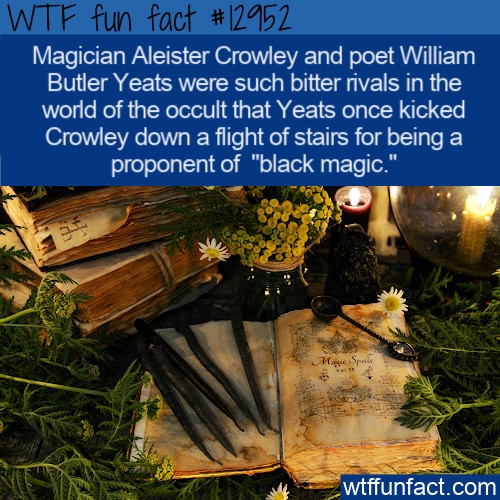 Aleister Crowley was an English magician. He founded a religion called Thelema and practiced what he called “Magick.” William Butler Yeats was an Irish poet who also dabbled in the occult. The two were bitter rivals – in fact, Yeats and Crowley fought over magic to the point of violence.

In the late 19th/early 20th century, the British duo were equally interested in the mystical world, albeit from very different angles. According to Open Culture (cited below) Yeats “once passionately wrote that the study of magic was ‘the most important pursuit of my life….. The mystical life is the center of all that I do and all that I think and all that I write.'” And while “Crowley would surely say the same, but his magic was of a much darker, more obsessive variety, and his success as a poet insignificant next to Yeats.”

The pair was at the center of the fight between practitioners of white and black magic.

Yeats was also outside of the mainstream of occult studies and was dismissed from the Theosophical Society for his experiments. After that, he joined Hermetic Order of the Golden Dawn, which later included writers like Bram Stoker. But Crowley was also part of the Order and the two butted heads because Yeats felt Crowley used his magic for evil.

As a result, Yeats made sure Crowley was never initiated into the Order’s inner circle. He later ensured Crowley was expelled altogether.

This happened in 1900 and Crowley reduced to accept the decision. According to Yeats biographer Richard Ellmann, Crowley launched “astral attacks” on Yeats and things finally deteriorated into physical violence:

.… in Highlander’s tartan, with a black Crusader’s cross on his breast… Crowley arrived at the Golden Dawn temple in London. Making the sign of the pentacle inverted and shouting menaces at the adepts, Crowley climbed the stairs. But Yeats and two other white magicians came resolutely forward to meet him, ready to protect the holy place at any cost. When Crowley came within range the forces of good struck out with their feet and kicked him downstairs.“

The Battle of Blythe Road

This moment became known as “the Battle of Blythe Road.”

Open Culture reports that after his ouster, “Crowley went looking for converts—or victims—in London, while Yeats attempted to stop him with ‘the requisite spells and exorcisms.’ One such spell supposedly sent a vampire that ‘bit and tore at his flesh’ as it lay beside Crowley all night.”

That’s certainly one way to deal with your enemies! — WTF fun facts