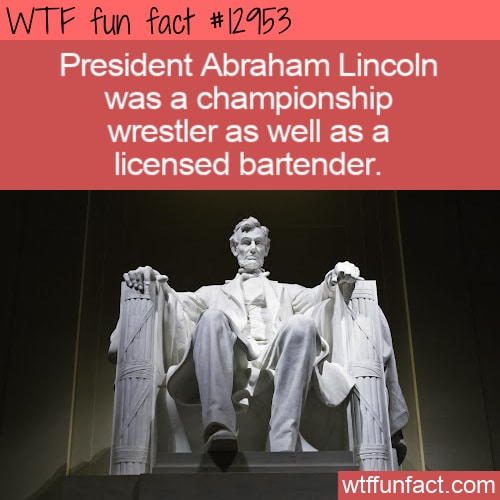 While U.S. President Abraham Lincoln was known for being a wrestling champ, it’s less well-known that he was also a licensed bartender. In fact, he co-owned a bar with a friend. Unfortunately, that story had a rather sad ending.

Abraham Lincoln is in the Wrestling Hall of Fame

While he grew up in a log cabin in the Kentucky wilderness and then moved to Illinois as a boy, much of Lincoln’s early life isn’t household knowledge. Take, for example, his wrestling “career.” According to the National Wrestling Hall of Fame:

“In the rough and ready style of the frontier, “catch as catch can” wrestling was more hand-to-hand combat than sport. Lincoln, an awesome physical specimen at 6-feet-4, was widely known for his wrestling skills and had only one recorded defeat in a dozen years.

At age 19, he defended his stepbrother’s river barge from Natchez thugs by throwing the hijackers overboard. Ten years later, Lincoln was a storekeeper at New Salem when his boss backed him to out-wrestle Jack Armstrong, local tough and county champion. From the start, Lincoln handed out a thrashing. When Armstrong began fouling, Lincoln picked up his opponent, dashed him to the ground and knocked him out.”

Lincoln went on to become a lawyer and, eventually, president of the United States. But before his law career took off, he was a shopkeeper and bartender. In fact, he’s the only president to have ever been a licensed bartender.

According to Chicagoist (cited below):

“In January 1833, he partnered with his friend from his militia days, William F. Berry, to purchase a small store, which they named Berry and Lincoln. Stores could sell alcohol in quantities greater than a pint for off-premises consumption, but it was illegal to sell single drinks to consume at the store without a license. In March 1833, Berry and Lincoln were issued a tavern, or liquor, license, which cost them $7 and was taken out in Berry’s name. Stores that sold liquor to consume on the premises were called groceries.”

Unfortunately, the store didn’t work out because of Berry’s alcoholism. He drank the store’s liquor, and the pair’s business fell into debt. “It wasn’t until 1848, when Lincoln was a congressman, that he was able to pay off the whole debt.”

Once Lincoln entered politics, he denied selling alcohol “by the drink,” but people knew. His opponents even poked fun at him over it during debates.