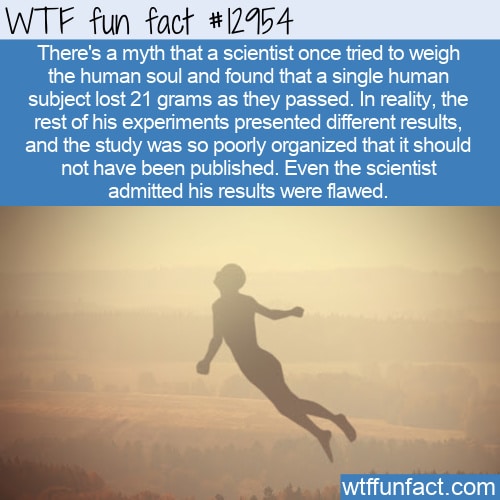 There’s no reliable way to weigh the human “soul,” though one person has tried. Still, the myth that the soul weighs 21 grams and that scientists have confirmed it still persists. And that’s because of a movie.

The weight of the soul

“21 Grams” is a 2003 film starring Sean Penn in which he plays a mathematician who experiments to find the weight of the human soul. It’s based on a story about a scientist, to some small extent, but the movie is pure fiction.

The man who attempted to weigh the human soul was a physician named Duncan MacDougall from Dorchester, MA. He assumed that if humans had souls in their bodies, those souls must weigh something. Therefore, upon death, the soul leaves the body and a person’s corpse should therefore be lighter.

In 1907, he wrote about his effort: “Since … the substance considered in our hypothesis is linked organically with the body until death takes place, it appears to me more reasonable to think that it must be some form of gravitative matter, and therefore capable of being detected at death by weighing a human being in the act of death.”

According to LiveScience, “MacDougall teamed up with Dorchester’s Consumptives’ Home, a charitable hospital for late-stage tuberculosis, which at that time was incurable. MacDougall built a large scale, capable of holding a cot and a dying tuberculosis patient. Tuberculosis was a convenient disease for this experiment, MacDougall explained in his paper, because patients died in ‘great exhaustion’ and without any movement that would jiggle his scale.”

We’re already on shaky ground here, but it gets worse.

“MacDougall’s first patient, a man, died on April 10, 1901, with a sudden drop in the scale of 0.75 ounce (21.2 grams). And in that moment, the legend was born. It didn’t matter much that MacDougall’s next patient lost 0.5 ounce (14 grams) 15 minutes after he stopped breathing, or that his third case showed an inexplicable two-step loss of 0.5 ounce and then 1 ounce (28.3 g) a minute later. MacDougall threw out Case 4, a woman dying of diabetes, because the scale wasn’t well calibrated, in part due to a ‘good deal of interference by people opposed to our work,’ which raises a few questions that MacDougall did not seem eager to answer in his write-up. Case 5 lost 0.375 ounce (10.6 grams), but the scale malfunctioned afterward, raising questions about those numbers, too. Case 6 got thrown out because the patient died while MacDougall was still adjusting his scale. MacDougall then repeated the experiments on 15 dogs and found no loss of weight — indicating, to his mind, that all dogs definitely do not go to heaven.”

Despite being a poor experiment with few samples in which his own first result was undermined by everything that came after it, he sent in his write-up to the journals American Medicine and the Journal of the American Society for Psychical Research, and his results were also reported in the New York Times.

No one except a sheep rancher in Oregon has ever tried to replicate the experiment, for ethical reasons.

So science has neither determined the existence of a soul nor its weight. — WTF fun facts

Source: “How much does the soul weigh?” — LiveScience