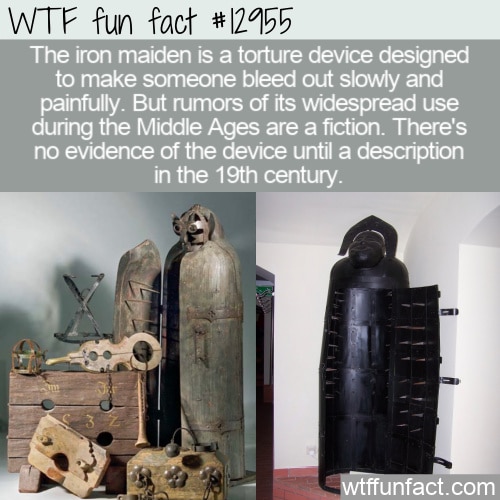 You may have heard of Iron Maiden the band, but they named themselves after what many have long considered a popular-yet-gruesome medieval torture device. But the iron maiden is part myth.

The Myths of the Middle Ages

People tend to think of the Middles Ages as a dark time in history (which is why they’re sometimes called The Dark Ages). In reality, people of the Renaissance era and the writers who came after them needed to distinguish it from a less glorious time, so they ended up casting the medieval period as one of stagnation and backwardness.

Now, that’s not to say things like medieval torture didn’t happen. It was just nowhere near as common as people think. And many of the devices that we find from that period weren’t used all that often.

So what is the iron maiden? It’s a coffin-like box with spikes on the inside. The idea is that you’d put a person in there, close the door, and they would be stabbed. The real cruelty supposedly came in the form of relatively short spikes. These short spikes would stab but not immediately kill, leaving the tortured person to slowly bleed to death in agony.

If you’re already predisposed to think of the Middle Ages as a time of cruelty, you might think the iron maiden device sounds like something the Church, or courts, or someone else in power might have used. But there’s just no evidence of that.

Despite its popular portrayal as a torture device of choice, according to Live Science (cited below): “The first historical reference to the iron maiden came long after the Middle Ages, in the late 1700s. German philosopher Johann Philipp Siebenkees wrote about the alleged execution of a coin-forger in 1515 by an iron maiden in the city of Nuremberg. Around that time, iron maidens started popping up in museums around Europe and the United States. These included the Iron Maiden of Nuremberg, probably the most famous, which was built in the early 1800s and destroyed in an Allied bombing in 1944.”

It’s hard to believe there would be no earlier direct reference to the iron maiden if it really existed.

Anything but an iron-clad history

To be fair, there are earlier references to devices that sound like the iron maiden. For example, a 5th-century book called The City of God which “tells a tale of torture of the Roman general Marcus Atilius Regulus, who was locked in a nail-studded box. Marcus didn’t die of being impaled, though; he was forced to stay awake lest the nails pierce his skin, and eventually died of sleep deprivation.”

The Greek historian Polybius, writing around 100 B.C., told a similar story of “the Spartan tyrant Nabis constructed a mechanical likeness of his wife Apega. When a citizen refused to pay his taxes, Nabis would have the faux wife wheeled out.” The device was covered in nails.

If these devices did exist (and we haven’t found any physical remnants), they predate the Middle Ages. In fact, a lot of so-called medieval torture devices (or at least descriptions of them) do.

It’s unlikely that torture was truly that elaborate on a widespread scale, but trying to extract information or punish people through pain has existed for millennia. So why is this how we remember the Middle Ages?

“…myths about over-engineered pain and punishment still resonate. In 2013, for example, local journalism site Patch reported that a history of torture exhibit at the San Diego Museum of Man had sent attendance at the museum up 60 percent over the previous year, helping pull the institution out of a financial hole.” — WTF fun facts