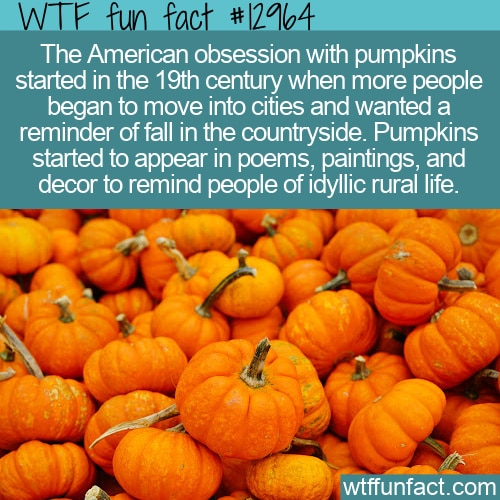 Even if you hate the taste of pumpkins, you might still be soothed by the sight of them. And there’s a reason for that.

What’s with our obsession with pumpkins?

Most pumpkin-flavored things don’t really taste like pumpkin or even contain pumpkin – in fact, most are made with a different type of squash altogether. We’re mostly in it for the spices.

Still, there’s a reason we market everything as “pumpkin flavored” – and it’s all about nostalgia.

According to NPR (cited below), a professor of American Studies at St. Louis University named Cindy Ott wrote a book titled Pumpkin: The Curious History of an American Icon in which she describes why we’re so drawn to the round, orange gourds.

“It’s a vegetable that represents this idyllic farm life, and the best sort of moral virtue. And Americans have become attached to that,” she said.

“‘The rehab of pumpkin’s popularity began when 19th century Americans began to move away from rural life and into the city,’ Ott says. ‘People became stressed about… moving into the office and off the farms, and [the pumpkin] starts to appear in poems and in paintings,’ she says. ‘We’re celebrating the nostalgia for this old-fashioned, rural way of life that no one ever really wanted to stay on, but everyone’s always been romantic about.'”

Did you know pumpkin beer isn’t a new phenomenon? Pumpkins were once the food of pure desperation.

NPR explains that “…pumpkin beers and pumpkin breads have been produced since colonial times, Ott says that they weren’t always the specialty foods that they are today. ‘Pumpkin beer was used when there was no barley. [If] there was no wheat for bread, they used pumpkin [for] bread,'”

If anyone mocks you for your pumpkin-flavored obsession, just tell them you’re helping the economy.