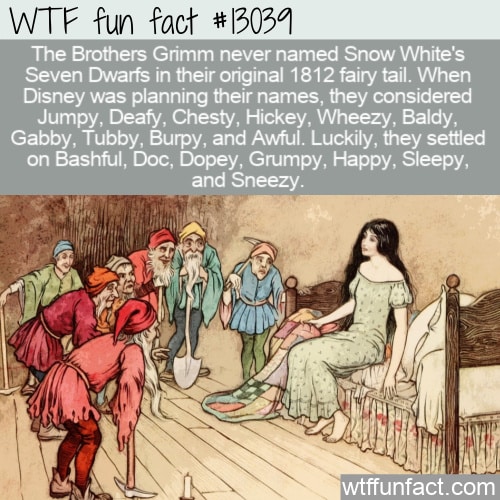 The Disney movie Snow White and the Seven Dwarfs is based on an 1812 fairy tale by the Brothers Grimm. But in the original, the dwarfs did not have names. And when Disney decided to make their 1937 film, they went through some interesting alternate names for the seven dwarfs.

According to Disney Diary, “It wasn’t until the 1912 Broadway play “Snow White and the Seven Dwarfs” that they were given monikers. And the names were not what you think. They were called Blick, Flick, Glick, Pick, Quee, Snick, and Whick.”

Disney didn’t necessarily love those names, so they went through quite a few alternate names for the seven dwarfs until they finally settled on Bashful, Doc, Dopey, Grumpy, Happy, Sleepy, and Sneezy.

We can’t confirm it, but according to Treasured Family Travels, “It is popularly believed that Walt Disney named the Seven Dwarfs after his own seven staff animators: Carmine Coppola, Ted Sears, Les Clark, Wolfgang Reitherman, Eric Larson, John Lounsbery, and William Cottrell.” Or, at least, he named them after their personality traits.

According to Mental Floss (cited below): “Disney and co. went through dozens of names before deciding on the seven we know today.” Some of them include Jumpy, Deafy, Chesty (?!), Hickey (again, ?!), Wheezy, Baldy, Gabby, Tubby, Burpy, and Awful.

Some of those might be a bit too on-the-nose to illustrate in an inoffensive way.

Disney Diary notes that modern retellings still change the names of the dwarfs.

“In ‘Mirror Mirror’ with Julia Roberts the dwarfs are named Butcher, Chuckles, Grimm, Grub, Half Pint, Napoleon, and Wolf. In the upcoming “Snow White and the Huntsman,” being released June 1, the names are Beith, Coll, Duir, Gort, Muir, Nion and Quert.”

We may just be biased by childhood fondness, but we think the Disney names are the best.

If you’re bothered by the spelling dwarfs (as opposed to dwarves, you may be interested to know that “dwarves” didn’t become a popular plural until JR Tolkien’s use of the word in The Lord of the Rings and The Hobbit. — WTF fun facts