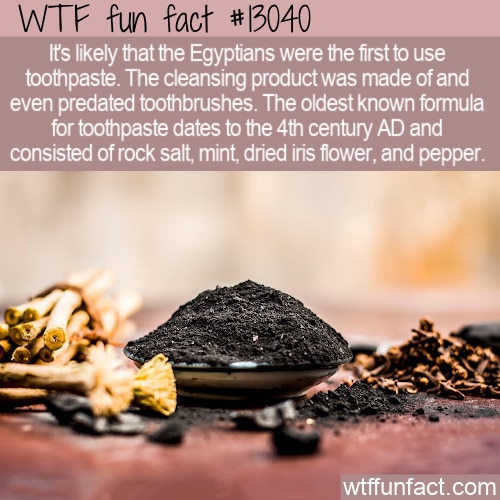 We tend to think of ancient people as having horrible tooth decay. In fact, it’s often referred to went talking about their shorter lifespans. But it turns out that toothpaste (and teeth cleaning generally) is an ancient concept. The oldest toothpaste comes from Egypt.

Dental hygiene has always been of relative importance. People who lived thousands of years ago may not have had twice-yearly dental cleanings, but they did have bristled toothbrushes and toothpaste.

According to Open Culture (cited below): “not only did ancient people use toothbrushes, but it is believed that ‘Egyptians… started using a paste to clean their teeth around 5000 BC,’ even before toothbrushes were invented.”

According to The Telegraph, in 2003, the oldest toothpaste formula (so far) was found at a Viennese museum. It dates from the 4th century AD. The Egyptian papyrus (which is written in Greek) “describes a ‘powder for white and perfect teeth’ that, when mixed with saliva, makes a ‘clean tooth paste.'”

It requires:
1 drachma of rock salt (about one-hundredth of an ounce)
2 drachmas of mint
1 drachma of dried iris flower
20 grains of pepper

The ingredients are to be crushed and mixed together.

Rock salt, mint, and pepper are probably not a recipe for the most pleasant experience for your gums, but it would be refreshing.

Once we get into the middle ages, we start to see things like charms and amulets used for dental health – so at least ancient Egyptian toothpaste would remove some germs.

Source: “Try the Oldest Known Recipe For Toothpaste: From Ancient Egypt, Circa the 4th Century BC” — Open Culture