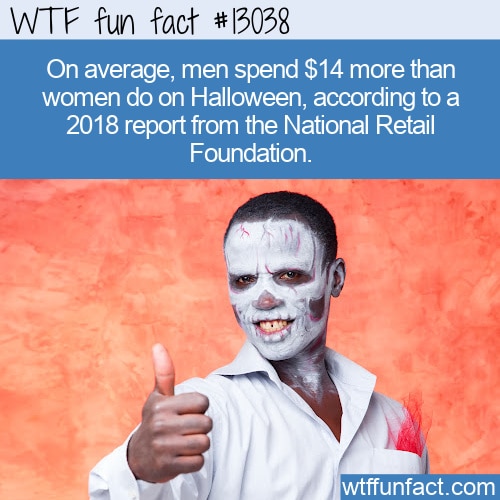 Halloween spending continues to rise, with even our furry friends getting increasingly involved. Of course, they’re not the ones who spend money on the holiday. In fact, the biggest spenders are men. A 2018 National Retail Federation (NRF) survey found men spend on Halloween at higher rates than women.

According to the most recent NRF Halloween spending report, “Participation in Halloween-related activities will resume to pre-pandemic levels, with 69% of consumers planning to celebrate the holiday this year, up from 65% in 2021 and comparable to 68% in 2019, according to the National Retail Federation’s annual survey conducted by Prosper Insights & Analytics. With the spike in participation, total Halloween spending is expected to reach a record $10.6 billion, exceeding last year’s record of $10.1 billion.”

And what are they spending it on? The NRF says “The top ways consumers plan to celebrate include handing out candy (67%), decorating their home or yard (51%), dressing up in costume (47%), carving a pumpkin (44%) and throwing or attending a Halloween party (28%). Similar to last year, one in five plan to dress their pet up in a costume.”

What do men spend on Halloween?

The last time the Halloween spending survey was broken down along gender lines appears to have been 2018. That survey (cited below) found that “Celebrants are planning to spend an average of $87. Although men and women plan to purchase the same festive items, men plan on spending $14 more, on average, than their female counterparts.” They were also more likely to find costume inspiration on social media sites like YouTube.

The costumes may be the factor that pushed men’s spending up. “Women are much more likely than men to celebrate by carving pumpkins and decorating their homes. Men, on the other hand, are significantly more likely to attend a party.” Who doesn’t want to look their best for those Instagram photos? — WTF fun facts