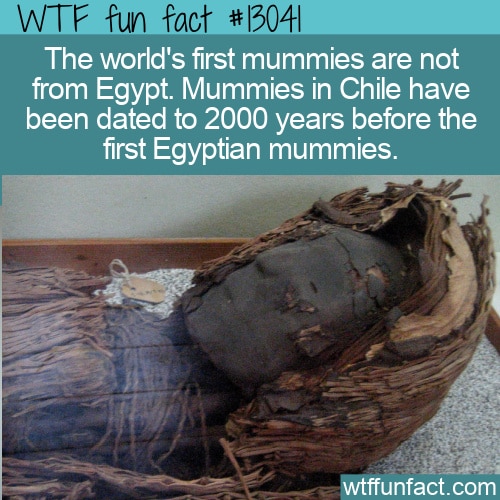 You might be surprised to know that the oldest mummy ever found does not come from Egypt. The practice of mummification likely began in Chile.

The Chinchorro people settled in the bays of the Atacama Desert of present-day Chile around 7,000 BCE. All evidence points to these people developing a mummification technique around 5000 BCE. That’s two millennia before the the first ancient Egyptian mummies.

According to CNN (cited below), the oldest mummies ever found are currently kept the San Miguel de Azapa Archaeological Museum in the village of San Miguel de Azapa. The museum has 300 specimens but only displays around 10% of the collection to the public.

“It’s a very sacred collection because the majority of the items are related to the ceremony of death,” Mariela Santos, the museum curator and conservationist told CNN.

In Chile, the first mummies were babies and fetuses. And the area developed at least five separate mummification processes. However, 2 (black and red mummies) are the most common.

“Making the black mummies involved taking the dead person’s body completely apart, treating it and then reassembling it, skin and all. The red ones were created by making small incisions to remove internal organs and then drying the body cavity. Both were typically stuffed with sticks and reeds (to fill out the forms), adorned with wigs, and masked with clay over the faces — the former painted in manganese and the latter in ochre.”

Recognition for the site of the oldest mummy ever found

Chile’s Chinchorro sites were declared UNESCO World Heritage Sites in 2021. This makes it more popular with tourists and gives the area more resources to preserve their mummies. It should also put Chile on the map as far as the history of mummification is concerned. However, an influx of tourists can also hurt local communities.

Athropologist Bernardo Arriaza has studied the Chinchorro mummies and is an advocate for the site getting the attention it deserves.

“What we’re trying to show is that we not only have the oldest evidence of intentional mummification, but it was done by pre-ceramic hunter-gatherer people in a pristine environment that remains today,” he told CNN. — WTF fun facts

Source: “Surprise! The world’s oldest mummies are not in Egypt” — CNN