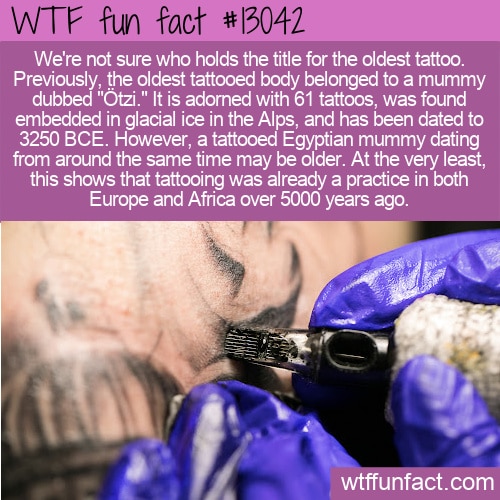 Right now, the world’s oldest tattoos date to around 3300 BCE. But dating isn’t an exact science. In addition, one tattooed body was found in the deserts of Egypt, while the other was encased in ice in the Alps. While that makes it harder to piece apart the details, it does tell us that tattooing is at least 5000 years old – and by that time, it was already being practiced on two continents!

The first discovery of the oldest tattoo

We know that the ancient Greeks and Romans used tattoos to brand enslaved people or signal a person of a particular profession (like prostitutes). But the practice appears to have been initially related to art, medicine, or spirituality. Without more evidence, we can only guess.

The “Iceman” known as Ötzi was discovered naturally mummified by ice in 1991 in the Alps between Austria and Italy. He was found with many wounds and is believed to have been murdered.

For two decades, Ötzi was our oldest example of a person with a tattoo. He had 61 of them, divided into 19 groups of black parallel lines grouped together. The tattoos can be found along his lumbar, behind his right knee, right ankle, along his legs, and on his left wrist. The “ink” appears to have been made from fire ash.

Since age and strain-induced degeneration have been discovered in those same areas, some researchers believe the tattoos were for healing purposes. Nearly half are located along what is currently known as acupuncture lines. However, the body dates to 2000 years before the use of this practice in China.

While Ötzi is fascinating, he may no longer be the oldest tattooed body.

Pushing back the dates for the world’s oldest tattoos

In 2018, two mummies dating from around the same time as Ötzi were found with tattoos – on a different continent. These mummies were in Egypt, and it took years for researchers to even notice the tattoos.

Multispectral techniques were used to reveal these tattoos – and at least one of the bodies may be older than Ötzi’s.

The British Museum’s blog notes that a male mummy known as “Gebelein Man A,” had a tattoo on his bicep:

“Dark smudges on his arm, appearing as faint markings under natural light, had remained unexamined. Infrared photography recently revealed that these smudges were in fact tattoos of two slightly overlapping horned animals. The horned animals have been tentatively identified as a wild bull (long tail, elaborate horns) and a Barbary sheep (curving horns, humped shoulder). Both animals are well known in Predynastic Egyptian art. The designs are not superficial and have been applied to the dermis layer of the skin, the pigment was carbon-based, possibly some kind of soot.“

A female mummy from a few hundred years later also had tattoos. That means it was not just a practice among men. It turns out the world’s oldest tattoos are a puzzle for the ages.

As Open Culture (cited below) notes: “In Middle Kingdom tattooing practices, a series of marks seemed to provide protection, especially in fertility and childbirth rites, functioning as permanent amulets or a kind of practical magic…And it does seem clear that tattooing was important to ancient, Predynastic men and women, maybe for similar reasons.” — WTF fun facts

Source: “The Oldest Tattoos Ever Discovered on an Egyptian Mummy Date Back 5,000 Years” — Open Culture