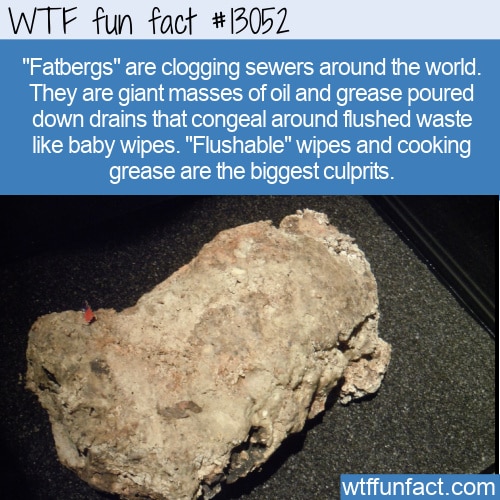 “Fatbergs” are clogging sewers around the world. They are giant masses of oil and grease poured down drains that congeal around flushed waste like baby wipes. “Flushable” wipes and cooking grease are the biggest culprits.

The trouble with fatbergs

These solid masses in sewer systems can cause big problems. In fact, the largest fatberg found so far (in London) weighed 130 TONS! That’s similar to 11 double-decked busses – and once they congeal, they’re as hard as concrete.

London in particular has a problem with these masses because their narrow Victorian sewer systems have yet to be updated. But fatbergs are a problem everywhere that people wash grease down the sink and flush non-biological matter like wipes and tampons.

According to Newsweek, “Fatbergs are placing an increasing financial burden in cities throughout the world. Clearing “grease backups” costs New York City more than $4.65 million a year. The U.K. spends about $130 million annually clearing roughly 300,000 fatbergs from city sewers. Even a smaller city like Fort Wayne, Indiana, shells out $500,00 annually to get grease deposits out of sewers. And the cost is usually passed along to customers through their water bills.”

The price we pay

Fatbergs raise the price of our water bills and taxes. But if they’re not treated, they’ll back up sewage into the streets.

There are professionals who remove these globs for a living, but they’re not terribly well-compensated for such an important-yet-dirty job.

The best way to stop the creation of fatbergs is to stop putting things in sewers that don’t belong there. And as for the greasy blobs that already exist, we have found some use for them. According to Newsweek, “…a good use was found for the debris, which was once London’s biggest fatberg—it was chopped up and converted into nearly 2,700 gallons of biodiesel.” — WTF fun facts

Source: “What is a Fatberg? The Gross Grease Giants Threatening Cities” — Newsweek