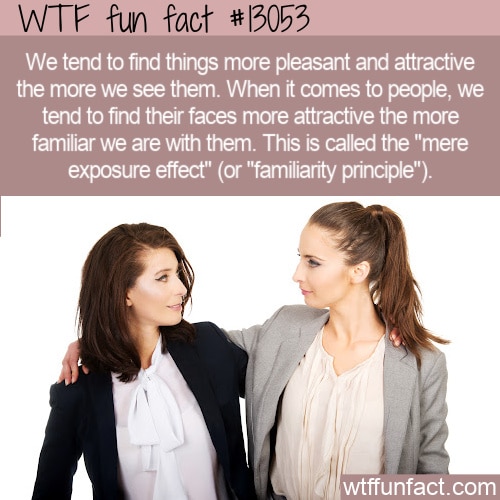 By merely exposing our brains to the sight of a person, we can build pathways that make them seem more attractive to us over time. The familiarity alone is enough to make us feel better about them. (Of course, this isn’t always the case, especially when there’s bad behavior involved.)

Research on this effect goes back to the early 19th century when German Gustav philosopher and experimental psychologist Gustav Fechner and Edward B. Titchener, who studied the structure of the mind. However, early hypotheses were eventually rejected, and it wasn’t until the 1960s that they were revived.

In the 60s, Polish social psychologist Robert Zajonc found that the brain’s exposure to novel stimuli elicited a fear or avoidance response. In other words, new things make us nervous. The same is true in both humans and animals.

But he found that each time a person viewed that stimulus again, there was less fear and more interest in the object. And after repeated looks, the observing person or animal will begin to act more fondly towards the object that was once new.

Wikipedia sums up a critical experiment in 1968 best:

This may have to do with perceptual fluency. In other words, our brain just have an easier time processing objects that they’ve already processed in the past.

However, when marketers try to use this to increase our familiarity (and propensity to buy something) by sticking it in our faces constantly, it doesn’t always work. In some cases, familiarity can breed hostility. — WTF fun facts