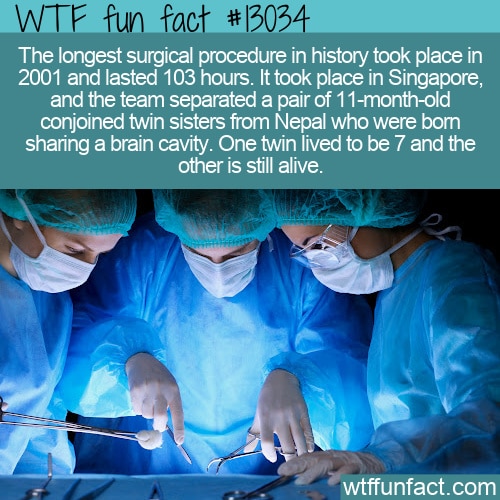 The longest surgical procedure in history took place in 2001 and lasted 103 hours. It took place in Singapore, and the team separated a pair of conjoined twin sisters from Nepal who were born sharing a brain cavity. The girls were infants at the time of surgery and lived to be 7 years old.

The longest surgery ever performed

Ganga and Jamuna Shrestha were born in Nepal. They were conjoined twins who had no real chance at life without a wildly expensive surgery that required a team of highly skilled surgeons.

The team included 16 doctors – from neurologists to plastic surgeons – who worked around the clock and who doubted that the operation could be entirely successful.

The surgery on the infant girls from Khalanga, a mountain village in Nepal is called a craniopagus and before that day, the longest surgery was around 30 hours.

The girls’ actual separation took place 88 hours into the surgery. The whole event lasted 52 hours longer than expected and surgeons had to take short naps in shifts in order to stay alert throughout the procedure.

According the The Guardian (cited below): “Claire Ang, one of the anaesthetists, said the team went through a whole gamut of emotions.

‘It varied from hysterical to euphoric and involved light-headedness, frustration and mood swings – from being very emotional to not caring at all and just wanting to sleep,’ she said.”

The paper also noted that the operation was made possible by advanced computer technology.

“The imaging software combines a series of scans of the babies’ brains to build a 3-D virtual model. The Singapore surgeons spent six months studying the brains and rehearsing. Wearing 3-D glasses, they manipulated the image by moving their hands, without buttons, keyboard or mouse.”

The girls did survive the surgery. Sadly, Ganga died of a chest infection at age 7. Jamuna is still alive.