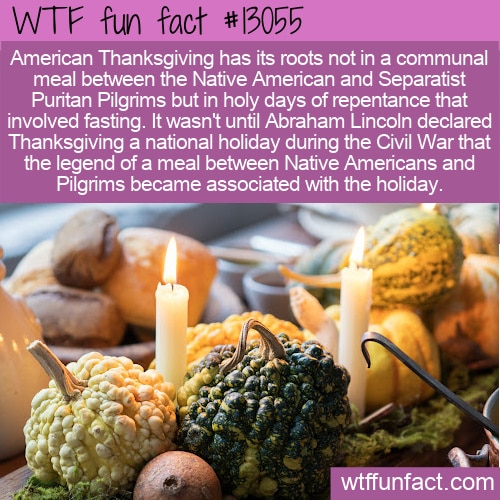 America celebrates Thanksgiving each year on the 4th Thursday of November. And while most of us learn a similar origin story for the holiday in elementary school, that version was largely manufactured for children. The original Thanksgiving in America was a religious holy day. And Puritan immigrants commemorated it by fasting rather than feasting.

The story of the original Thanksgiving

Here’s the gist of what many (but not all) Americans learn as children regarding Thanksgiving: The Pilgrims were persecuted in England and sailed to America to find religious freedom. They were sick and hungry when they landed at Plymouth Rock in Massachusetts. The local Native American Wampanoag tribe helped the Pilgrims plant corn and hunt turkey. To celebrate a successful harvest, they shared a communal meal.

Thanksgiving is also considered a secular holiday in America. While the Pilgrims immigrated for religious reasons, those aren’t really part of the Thanksgiving story (other than the occasional mention that they all said a prayer before their meal).

The real story of Thanksgiving

For some more context into Thanksgiving, it’s important to know that the Pilgrims were a splinter group of Puritans. They were called Separatists and followed the teachings of John Calvin. Calvin taught that Scripture was the only guide to life. The Separatists first tried to go to Holland after leaving England but eventually decided to leave Europe altogether and set out for what Europeans called “the New World.”

On the way to their ship from Holland, the Separatists stopped in Plymouth, England, for supplies. The Mayflower carried them to the shores of North America, where they did struggle to survive on what they called Plimoth Plantation.

There were multiple small groups of Separatist immigrants, and each established its own church with its own pastor. Only one church has records of any harvest-time feast in 1636. We don’t have any other records from these early immigrants, so the story of Thanksgiving is entirely concocted from later stories.

Even 100 years later, there are some vague references to harvest-time feasts to celebrate American military battles. But none that refer to Native Americans.

A religious holiday of fasting and repentance

The Puritans would practice “public days” in response to things like droughts or other meaningful events. But these days involved reading Scripture, attending church services, and fasting to repent for their sins.

If there were formal 17th-century “Thanksgiving” celebrations, they would have originated from these public days and would not have involved feasting. Public atonement would have been highly religious in nature as well, not a secular holiday.

The Boston Globe (cited below) describes one such public day. In the archives was a record of a January 1697 public day of atonement for the Salem Witch Trials and the execution of innocent women.

If Thanksgiving stemmed from an early Puritan settler tradition, it was likely days like these.

The Boston Globe states, “It may be hard to see a connection between such earnest supplications and our modern Thanksgiving, but it was that Colonial holiday that America’s founders had in mind when they declared national days of thanksgiving.”

The first – but not original – Thanksgiving

In 1777, the Continental Congress announced the first national day of thanksgiving (not yet a formal holiday, so with a lowercase “t”). They instructed the public to give thanks and offer “penitent Confession of their manifold Sins.” It had nothing to do with a meal.

President George Washington declared a national day of thanksgiving on November 26 in honor of the Constitution to thank God “for the civil and religious liberty with which we are blessed.” His instructions for Americans were to “unite in most humbly offering our prayers and supplications to the great Lord and Ruler of Nations and beseech Him to pardon our national and other transgressions.” Again, no turkey.

Later, “President John Adams called for national fast days in 1798 and 1799. His proclamation announcing the first ‘day of fasting & humiliation’ was ‘a loud call to repentance and reformation’ in the face of possible war with France. President Madison called for two thanksgiving days, but by 1815 the custom of public days in America had died out.”

Abraham Lincoln created the enduring legend of the Native Americans and Pilgrims during the Civil War. He created what we now celebrate as Thanksgiving in 1863, declaring it a federal holiday. He also linked the day to the harvest, shifting the focus to food as a means of celebrating national unity. — WTF fun facts

Source: “The opposite of Thanksgiving” — The Boston Globe
* Note: While containing factual info, this was printed in the opinion section. A scholarly article on the same topic is available in the journal Gastronomica but is partly behind a paywall.