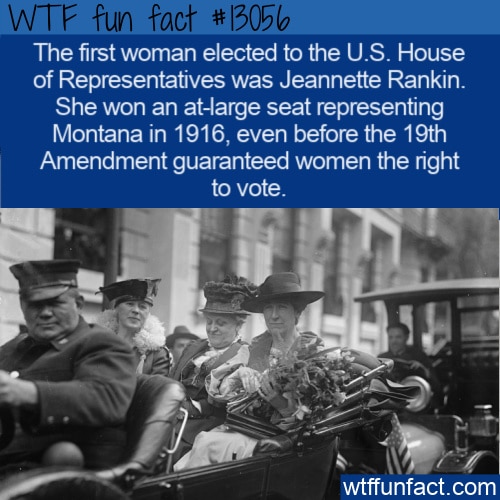 Who was Jeannette Rankin?

Born in 1880 near Missoula, Montana (then a territory), Rankin was born to a prosperous rancher who had emigrated from Canada.

Jeannette Rankin was educated at what was then called Montana State University in Missoula (now known as the University of Montana). She graduated in 1902 with a biology degree, became a teacher, and then an apprentice to a seamstress.

After a trip to San Francisco in 1904, Rankin started volunteering and developed an interest in social work. She graduated from the New York School of Philanthropy (now called the Columbia University School of Social Work) in 1909. Then she moved to Spokane, Washington to take a job helping children in need.

Rankin served two nonconsecutive terms in the House during World War I and II but was known for voting against America’s entry into those wars. Her platform largely centered around expanding women’s voting rights, ensuring better working conditions for American laborers, and improving access to healthcare for women and children.

Rankin then traveled around the country, doing everything from organizing immigrant laborers after the Triangle Shirtwaist Factory to supporting nationwide suffrage for women.

She played one of the most significant roles in helping women gain the right to vote in Montana and then decided to run for one of Montana’s at-large House seats in 1916. While there was no national right to suffrage for women at the time, many Western states had passed their own laws.

When Rankin ran for office, she was one of many women who ran that year but the only female winner. In Kansas, over 300 women ran for office. In her own state, Rankin’s campaign was entirely ignored by the local press.

According to her webpage on the U.S. House of Representatives website (cited below), she won the Republic primary by more than 7000 votes. “Her platform supported several prominent issues during the Progressive Era—including nationwide suffrage, child welfare legislation, and the prohibition of alcohol.“

“Because Montana was so sparsely populated, election results trickled in over three days. But in early November 1916, news arrived that Rankin had become the first woman in American history to win a seat in Congress. Although she trailed the frontrunner, Democratic Representative John Morgan Evans, by 7,600 votes, Rankin secured the second At-Large seat by topping the third-place candidate—another Democrat—by 6,000 votes.”

Not surprisingly, as the first female member of Congress, she was held to different standards, often being asked about her clothing more often than her politics.

But when she was sworn into office, she was greeted with loud applause.

As a pacifist, she was criticized often, despite correspondence from her constituents leaning in favor of the U.S. staying out of WWI. But once the U.S. entered the war, she turned her attention to ensuring troops had what they needed while continuing to fight for national suffrage and workers’ rights in factories.

She continued her service work outside of Congress until 1940, when she challenged an anti-Semitic House Representative for Montana’s western district. She won the primary and then the election, returning to the House with 54% of the vote.

When Jeannette Rankin returned to Congress decades after her first stint, she sat alongside six other women.

However, her second stint was less successful since her pacifism was even less popular during WWII. She did not run for re-election in 1942. At the time of her death in 1973, however, she was considering another House campaign to protest the war in Vietnam. — WTF fun facts