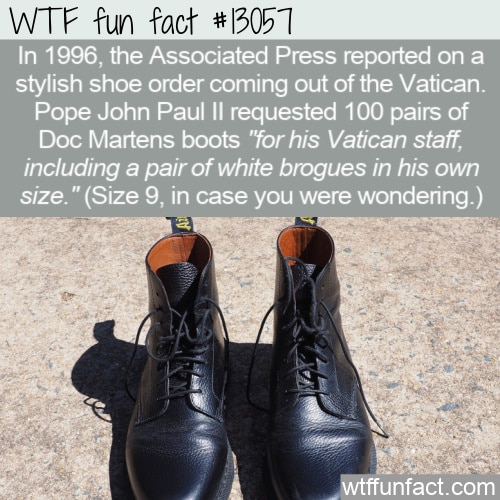 Did you know Pope John Paul II wore Doc Martens boots? Not only that, but he ordered dozens of pairs of the boots in white for himself and his staff!

The Pope gets stylish with Doc Martens

In a now-archived story from 1996 (cited below), the Associated Press (AP) reported that Doc Martens’ military-style kickers had a new fan – Pope JP2.

They noted that “The Pontiff has ordered 100 pairs of the cushion-soled boots for his Vatican staff, including a pair of white brogues in his own size.”

In fact, he wasn’t the only religious leader to own a pair, the AP reported that the Dalai Lama owned a pair as well.

The boots, originally sold as solid and practical work boots, have long been seen on style icons. But with the Pope’s clothing so formal, we never really would have seen that coming. And most of the time, they would have been hidden by his robes.

Still, sometimes you just need solid footwear to get the job done, no matter what that job is.

If you look back at photos of Pope John Paul II, you’ll often see him in some practical-yet-colorful blue slip-on (blue suede shoes, if you will). Yet, because part of the Vatican’s Doc Martens order included a special set in the pope’s size (size 9), it seemed clear that he was reserving the right to stomp around in them occasionally as well.

“The holy order includes a pair of the classic eight-eyelet bovver boots (quite frequently worn by skinheads) and three pairs of brogues in black, blue and white,” noted the AP.

The AP reported that “Among the first to try out the new Doc Martens boots in the Vatican will be the Pope’s Swiss guards.” That we’re less surprised about – because have you seen those uniforms? The boots would be the most practical aspect.

The original Doc Martens were manufactured in Northampton, England, though they were sold worldwide. If you’re a Gen X-er, you may remember lacing up a pair while popping in Nirvana’s “Nevermind” CD (or cassette!). They were big with the grunge crowd.

“Well the order was placed by the Vatican and they have asked us to supply a number of styles including the most famous eight eyelet boot in black, white and navy leather and also some three eyelet shoes”.