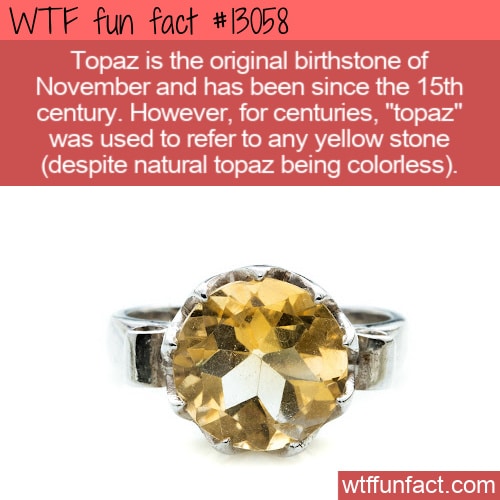 Today, gemstones have been officially defined by their chemical properties, and jewelers for over a century have tried to standardize birthstones based on the gems most readily available for customers to buy. But the history of November’s birthstone – the topaz – is a curious one.

Today, you can choose from topaz or citrine (which is more affordable) for your November birthstone. That’s likely because traditional yellow topaz is harder to come by (and it’s a very hard gem, just behind diamonds on the Mohs scale). But did you know that natural topaz doesn’t have any color at all?

It’s the impurities found in the soil around gems that lends them their color. However, gemstone sellers will also use additives to give them a specific glow as well.

According to The Farmer’s Almanac, “…it’s impurities that cause this normally colorless stone to come in a dizzying array of hues. Red and pink shades come from chromium while the classic blue color is an unnatural shade that comes from exposing mined topaz to high-energy radiation. There are also highly prized sherry-colored stones in shades of orange and pink, which are referred to as “imperial topaz” after the 19th-century czars of Russia.”

The history of November’s birthstone

Topaz is so strong and resistant to heat that it’s used in industry as well as in jewelry. The most prolific topaz mines are in Australia, Italy, Norway, Pakistan, Russia, Sri Lanka, Sweden, and Utah.

Topaz has been associated with November birthdays since the 15th century at the very least. But it wasn’t until 1912 that the National Association of Jewelers made it an official birthstone.

Farmer’s Almanac also notes that “The name comes from Topazios, the Greek name for what is now known as St. John’s Island, an Egyptian island in the Red Sea. Interestingly, during that era, this was the name given to any yellow stone. In fact, the original ‘topaz’ from which the modern gem gets its name was most likely chrysolite.”

In 1737, the first modern piece of topaz that would set the definition from there on out was found in Germany. But since these modern pieces tended to be hard and colorless, many miners assumed they were diamonds. The Portuguese crown was filled with topaz assumed to be diamonds in the 18th century.

We often associate gemstones with certain “powers.” For topaz, this tends to be protection from greed and a balanced emotional state.