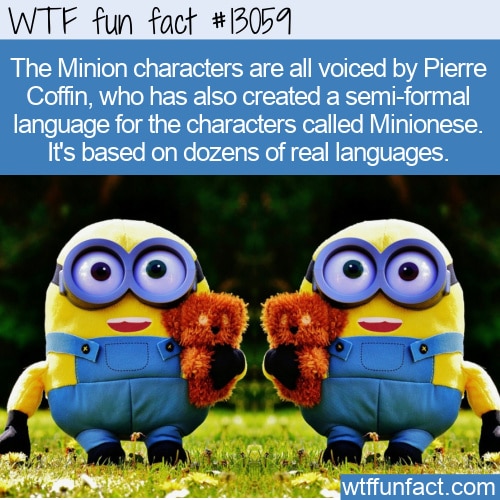 Have you seen “Minions,” “Despicable Me,” or “Despicable Me 2”? If so, you may have heard the Minion characters speaking their own language. All Minions are voiced by Pierre Coffin, who also created the language called Minionese.

Minionese and other made-up languages

From Klingon to Elvish, storytellers have been making up their own languages for years. And some fans have ever learned how to speak them.

According to the Motion Picture Association, Minionese is “the lexical version of a hearty stew, made up of words from multiple languages, expressed not only vocally, but through the Minions’ physical comedy. While the creation of Minionese makes narrative sense now that the Minions have a rich backstory…Coffin’s goal was for the audience to understand Minionese without actually knowing the exact verbiage through the Minions huge range of vocal melodies and inflections, as well as their physical actions.”

It takes an interesting mind to create such a dynamic method of communication!

Coffin’s first task was creating a backstory for Minions Kevin, Stuart, and Bob. The characters are part of a nomadic tribe in search of a master. In the course of their journey, they’ve taken on bits of different languages they’ve come across. In fact, there are elements of Egyptian, French, and even Transylvanian.

But each character’s intonation means a lot to the language as well. All three Minions have different ways of vocalizing.

He actually started building the language while watching silent films. That helped him understand how visual communication would play an integral role in having characters speak something no one had ever heard (but needed to understand if they were going to follow the plot).

When Coffin gets stuck on a line of Minion dialog, he just turns to other languages:

“Every time I got stuck in a sequence or in a shot where I need to express something, I have my Indian or Chinese menu handy. I also know a little bit of Spanish, Italian, Indonesian and Japanese. So I have all these sources of inspiration for their words. I just pick one that doesn’t express something by the meaning, but rather the melody of the words.” — WTF fun facts

Source: “Here’s How They Created Minionese, the Language of the Minions” — Motion Picture Association