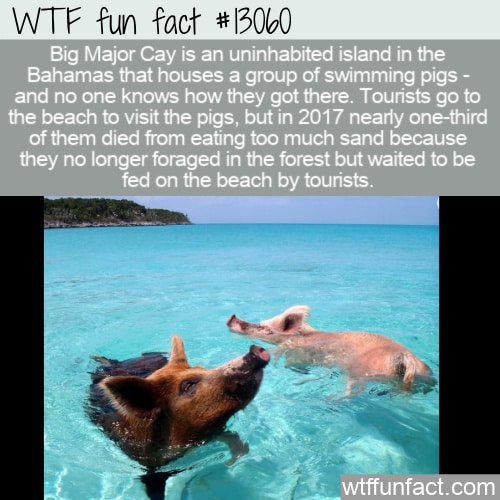 Swimming with pigs in the Bahamas might sound like a great tourist activity. And thousands of people have enjoyed it. But like so many other “animal attractions,” it’s turning out to be great for marketing but not great for the animals themselves.

In 2017, seven pigs were found dead. Originally, wildlife specialists thought they may have been intentionally poisoned by tourists. But it turns out that while tourists are at fault, it was an accident.

The swimming pigs of the Bahamas

Big Major Cay in the Exumas is an uninhabited island. Except for the 20-30 feral pigs who live there. No one knows how the pigs got there, but they were likely left by sailors or escaped a ship and swam to shore.

The pigs love swimming and are generally pretty cute, so they make a great tourist attraction. For a couple of hundred dollars, you can go to the island and swim with the pigs, bringing them all sorts of snacks.

But if you really love wildlife, you’d probably do best to let them be.

It’s not the snacks themselves that harm the pigs. It’s the fact that humans have lured them down to the shores of the beach to get food. Why would they hunt for it themselves if it’s being handed out on the beach?

The death of the swimming pigs

In February of 2017, people were shocked to learn about the death of 1/3 of the beloved pigs. There were fears that tourists had given them alcohol and killed them.

But once they had autopsies, wildlife experts determined that sand played a huge role in their demise. Sand can’t be digested, so when the pigs snarf up a tasty snack off the beach or forage through the sand themselves when tourists aren’t around, they end up getting sand in their stomachs.

The dead pigs were full of sand.

A little over a dozen pigs remained after the tragedy. And you can still go see and swim with them. However, the Bahamas passed legislation to protect them and insisted tourists don’t leave behind any food. The beach is for lounging and swimming only.

A warden is now stationed at Pig Beach to keep tourists from breaking the rules. — WTF fun facts