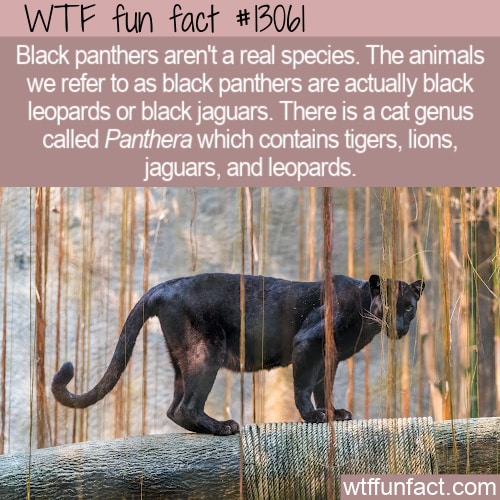 It’s not entirely correct to say that there’s no such thing as a black panther. It’s just that they’re not a specific species.

Instead, Panthera is a genus within the family Felidae (aka cats) that includes tigers, lions, jaguars, and leopards. Panthera refers specifically to a cat’s cranial features.

So, what is a black panther?

A black panther refers to the melanistic (darkly pigmented) version of two different animals – the leopard and the jaguar. So while it doesn’t refer to a separate species, “black panther” is a colloquial term for these dark-colored cats.

While occasionally people may use the term panther to refer to mountain lions, they belong to the Puma genus. An integral part of the Panthera genus is the ability to roar – which mountain lions don’t do. Instead, they emit a higher-pitched scream.

The epihyal bone is integral to the ability to roar. The only species of Panthera that cannot roar is the snow leopard.

Why do we hear so much about black panthers?

If you feel like you’re hearing a lot about black panthers these days, it’s no doubt because of the incredibly popular Marvel movie franchise of the same name. The original Black Panther film made over $1 billion worldwide, and fans were shocked when it’s star – Chadwick Boseman – died of cancer in August of 2020. He had not revealed his diagnosis of stage III colon cancer to anyone but immediate family.

In 2022, the Black Panther sequel Wakanda Forever will be released. Even in the days before it’s release, fans are interested to see how the exceptionally successful movie franchise will survive without its star who played T’Challa, the kind of a fictional African country named Wakanda.

Marvel’s film studio chose not to recast or digitally recreate the character in order to honor Boseman. — WTF fun facts