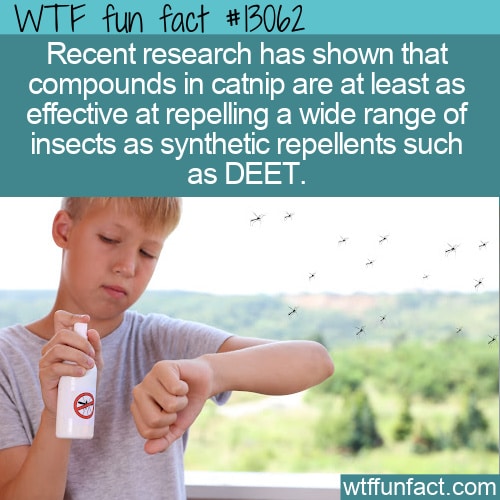 Could catnip be better than DEET at repelling insects? If so, that’s great news for those of us who would like to avoid spraying synthetic compounds all over our bodies.

Research on repelling insects with catnip and DEET

Researchers from Northwestern University and Lund University have been investigating catnip as an insect repellent, particularly for mosquitos. Since mosquitos carry potentially deadly diseases, it’s crucial to find a way to protect vulnerable people during warm weather.

Catnip is part of the mint family and, when dried, is exactly the same substance that you’ll find inside cat toys. However, catnip extract – a more concentrated form – is what you’d need to scare away mosquitos and other insects.

“Catnip and its active ingredient, Nepetalactone, have been used for millennia to ward off insect pests, at least since the time of Pliny the Elder,” said Marcus C. Stensmyr, associate professor at Lund University. “But why Catnip is so potent on such a broad range of insect species has remained unknown.”

According to Northwestern University’s website on the research “Traditional approaches to mosquito control involved insecticides, but those eliminate other insect species as collateral damage. Modern formulations of insect repellents such as DEET target mosquito odor and taste receptors, rendering the insect incapable of recognizing the chemical cues that signal a human prey.”

Nepetalactone, the active compound in catnip activates a pain receptor found in some insects. It’s still unclear how cats are so attracted to it.

So-author Marco Gallio noted that plant-derived repellants like catnip are also cheaper and more readily available than something like DEET.

In 2001, a paper presented at the American Chemical Society suggested that nepetalactone could be up to 10x more effective than DEET in repelling insects. — WTF fun facts