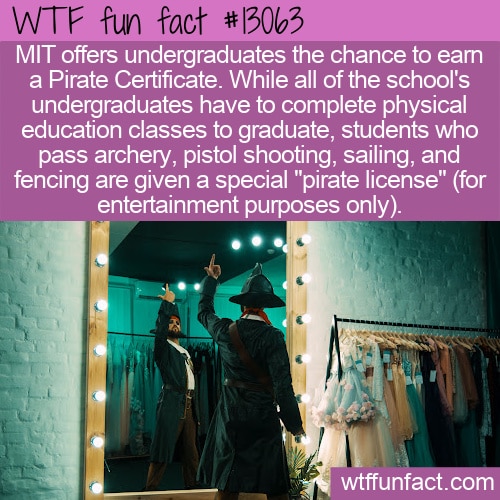 It’s hard to get into MIT. But if you do, you not only have a chance to earn a great education and get plugged into an enviable alumni network, you also have the chance to earn the MIT Pirate Certificate.

According to the MIT Alumni webpage (cited below), the school made a piece of underground culture a formal certification program in 2011.

While actor Matt Damon received an honorary pirate certificate from the university, “Only MIT students and alumni can earn the genuine article.”

The biggest part of the pirate challenge is getting into the appropriate courses. They fill up in minutes. That means MIT gives the “distinction” to only around 50 students a year.

The courses you need to pass as an MIT student to get a pirate certificate are: pistol (or rifle), archery, sailing, and fencing.

“Since sailing requires passing the swim test, successful pirates have wrapped up their PE requirements with a hearty arrr, arrr, arrr,” jokes the website.

Of course, life as an MIT pirate doesn’t mean sailing the high seas in search of booty. The certificate is for entertainment purposes only.

“The certificates, authorized by the ‘swashbuckling’ Institute, are printed on faux parchment and affirm that the named “’salty dog’’ is entitled to a pirate certificate ‘with all its privileges and obligations thereof.'”

So not only can you get a great education at MIT, but you can also put “pirate” on your resume. — WTF fun facts