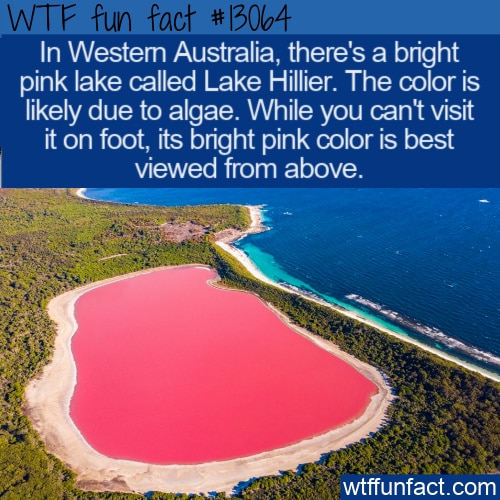 Australia’s pink Lake Hillier is located in Western Australia. It lies near the Pacific Ocean, so when viewed from above the fact that the lake is bright pink is even more striking.

It’s less than a half mile across (600 meters x 250 meters, more specifically), but Australia’s pink Lake Hillier is truly a sight to behold. Unfortunately, you can no longer access it from land.

The good news is that while it’s Australia’s most famous pink lake, it’s not the only one. And there are others in the world as well. Senegal, Mexico, Spain, and Azerbaijan all have pink lakes too.

“The reason of its unique colour is still a topic that is not fully understood by scientists, although most suspect it has to do with the presence of the Dunaliella salina microalgae. The Dunaliella produces carotenoids, a pigment found in carrots as well. But the presence of halophilic bacteria in the salt crusts could be another explanation. A reaction between the salt and the sodium bicarbonate that is found in the water may cause it as well.”

Discovered in 1802 by cartographer Matthew Flinders, the lake is located on Australia’s Middle Island in the Recherche Archipelago. It’s most pink when viewed from above. And, unlike other pink lakes, its water samples appear pink in a glass as well.

While it’s safe to swim in, you can’t actually get near its surface.

“There are Scenic Flight Services departing Esperance Airport several times a day but you cannot land on Middle Island…There are no regular services to set foot on any of the Islands in the Recherche Archipelago with the exception of Woody Island.”

If you try to get to the lake, don’t be fooled by the nearby Pink Lake (aka Lake Spencer) in the town of Esperance. That lake used to be pink but has lost all its color and is now a milky white.

You’ll just have to enjoy Australia’s pink Lake Hillier from above, which is the best way to see its color anyway. — WTF fun facts