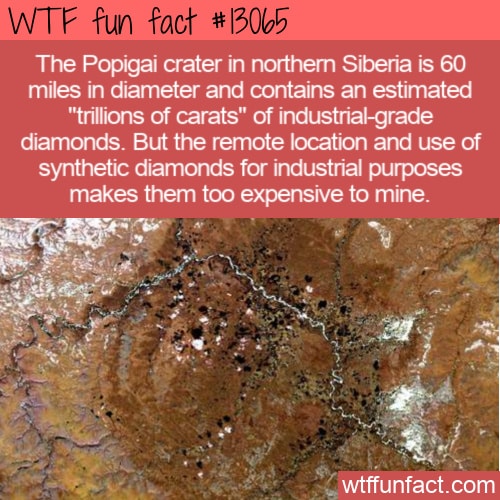 The Popigai crater, located in Siberia, is estimated to be the world’s largest diamond mine. It may contain trillions of carats of diamonds. Previously, the Russian government has claimed that, if mined, the diamonds could tank the entire worldwide diamond market. But there’s a catch.

Is Popigai crater the world’s largest diamond mine?

There are a few things we know for sure about Popigai. First, it’s one of the largest (the 4th largest, to be exact) and most well-preserved asteroid impact craters on the planet. It’s located in northern Siberia and is roughly 60 miles in diameter.

According to NASA, “The crater sits on the northeastern margin of the Anabar shield, which contains a mix of graphite-bearing rocks and sedimentary rocks. The impact from the asteroid melted 1,750 cubic kilometers (420 cubic miles) of rocks and instantly transformed the flakes of graphite into diamonds. Diamonds formed in a hemispherical shell about 1.6 kilometers (a mile) thick and about 12 to 13 kilometers away from the impact site. Scientists estimate that diamonds did not form at the impact site because the collision’s heat and pressure were likely too great to survive there.”

The Russians have claimed for decades that the crater contains “trillions of carats” of diamonds. But it’s been largely left unexplored.

Not your average diamonds

Because the diamonds in the Popigai crater are impact diamonds, they didn’t form the same way as gemstones. That means they’re of no use to the jewelry industry.

While they range in size, most are smaller than 2 millimeters. But more importantly, they aren’t pure.

While they hold great value for industrial uses, Russia has left Popigai largely unmined because they have the means to produce synthetic diamonds for industrial purposes without going through the trouble of mining at such a large scale.

First discovered in the 1970s under the Soviet regime, the diamond mind made world news in 2012. At the time, the Russians claimed the crater held enough diamonds to supply the international diamond market for 3000 years. But, again, that would be for industrial diamonds.

Russia already has a series of diamond mines. Right now, it appears the cost of mining the diamonds so far does not outweigh their value – at least to Russia. Others have speculated that mining the diamonds could lead to an enormous technological revolution. — WTF fun facts