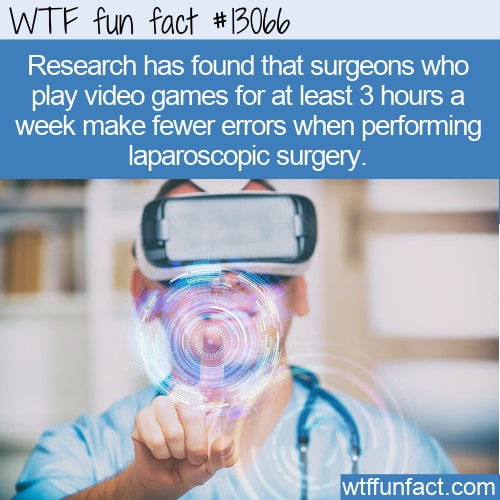 Surgeons who play video games for at least a few hours a week make fewer errors during surgery. This specifically relates to non-invasive and very precise laparoscopic surgery.

According to the authors:

The researchers set out to measure the relationship between “laparoscopic skills and suturing capability, video game scores, and video game experience.”

Because they found a correlation between video game skills and positive laparoscopic surgical skills, the researchers suggest that medical training curricula might video games in the future. But this applied to surgery that didn’t require a large incision. Instead, laparoscopic surgery uses a small incision or hole and is largely computer-guided. It’s a more popular kind of surgery because there are typically fewer risks involved for the patient and less down-time.

While the authors acknowledged the drawbacks of playing video games excessively (such as poor grades and possible heightened aggressiveness), they also highlighted the benefits.

The benefits of gaming

The authors cited other studies that found correlations between playing video games and the ability of gamers to process visual information, improve their spacial awareness skills, and develop better visual attention processing.

These are all crucial skills for surgeons. — WTF fun facts

Source: “The Impact of Video Games on Training Surgeons in the 21st Century” — JAMA Surgery