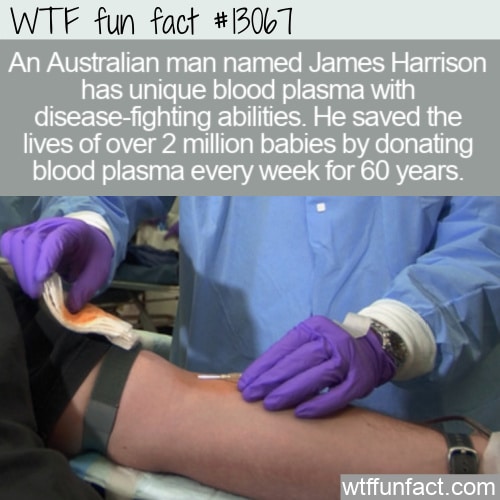 James Harrison earned the nickname “the man with the golden arm” after saving the lives of millions of children. That’s because Harrison not only has unique blood with disease-fighting abilities, but he donated that blood every week for 60 years. He “retired” from blood donation in 2018 at age 81.

Who is the man with the golden arm?

James Harrison is an Australian man who needed chest surgery at age 14. After blood donations saved his life at a young age, he pledged to become a life-long blood donor.

After Harrison started giving blood, doctors realized he had unique components in his blood plasma that allowed them to make Anti-D injections. These injections are given to pregnant women whose fetuses are at risk from Rhesus disease, which causes a mother’s immune system to attack her fetus’ blood cells. This puts them at higher risk of anemia and jaundice after birth.

Doctors believe that Harrison’s rare blood may be the result of transfusions he received as a child after surgery.

Harrison’s blood plasma can be used to make an injection that prevents women from developing antibodies that harm the fetus during pregnancy.

In Australia, roughly 3 million women with the rhesus-negative blood type have been given an Anti-D injection, nearly all of which are a result of Harrison’s donations. Even his own grandchild was saved by the injection.

Prior to Harrison’s blood donations, thousands of fetal deaths, stillbirths, and baby deaths occurred in Australia each year as a result of Rhesus disease.

For his donations, Harrison is considered a national hero in Australia and has received the country’s national Medal of Honor.

Harrison retired at the age of 81 – but that’s only because in Australia you can no longer donate blood beyond that age. — WTF fun facts

Source: “He donated blood every week for 60 years” — CNN