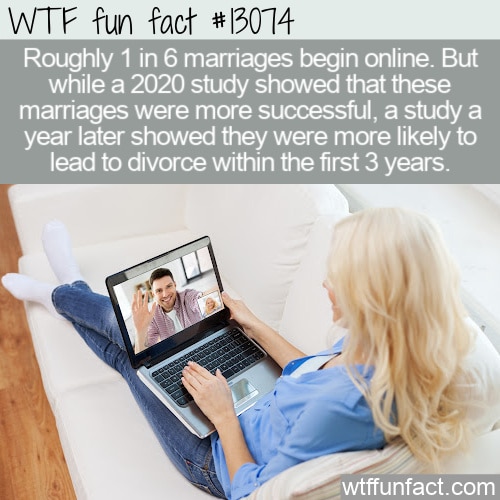 Studies found that 1 in 6 marriages these days begin after online dating. Interestingly, research from 2020 showed that dating apps were linked to stronger marriages and lower divorce rates. However, in 2021, another study found that couples who meet online were more likely to get divorced during the first three years of their marriage. So, what can we make of the data on marriage and online data?

According to Pew Research Center (cited below), 30% of U.S. adults have used a dating app. And while many experiences were positive, younger women are more likely to be harassed on these platforms.

The good and the bad of online dating

Like most other ways of meeting people, online dating comes with benefits and drawbacks.

In general, people say it’s an easier way to meet people they find attractive and who share their interests. “But users also share some of the downsides to online dating. Roughly seven-in-ten online daters believe it is very common for those who use these platforms to lie to try to appear more desirable. And by a wide margin, Americans who have used a dating site or app in the past year say the experience left them feeling more frustrated (45%) than hopeful (28%).”

Women under 35% have the most trouble using apps. In fact, 60% of these users have had people continue to contact them after making it clear they were not interested. And 57% report being sent unsolicited sexually explicit messages.

Men and women were equally likely to have used a dating site or app, according to Pew. And white, Black, and Hispanic users all had roughly the same number of users. However, the tech is most common with people under age 35.

While the Pew survey found the number of U.S. marriages that started online to be 12% (less than other surveys), it’s still a significant number.

Interestingly, despite many positive experiences, around half of women think online forums are an unsafe way to meet someone. This is presumably because of the amount of harassment they get.

As for the future of marriage and online dating, only time will tell whether they are more successful. — WTF fun facts