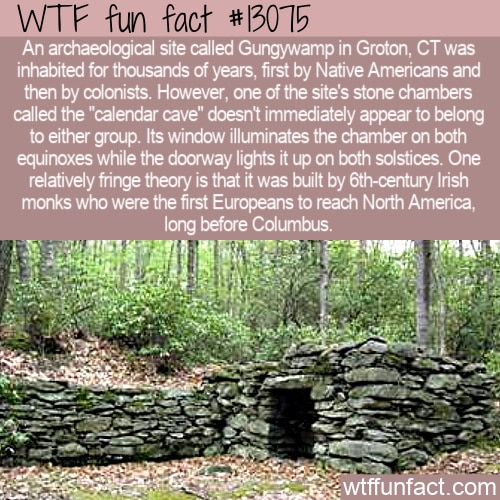 Gungywamp is a bit of a mystery. But that’s true of nearly all archaeological sites. They don’t exactly come with a guide map explaining what everything is. But the most surprising thing about this over 4000-year-old set of stone circles is that they’re in Groton, Connecticut. Of course, there were Native peoples all over the continent, but the sites changes what anyone previously knew about them.

The site has artifacts dating from 2000-770 BCE. In and around the 100-acre site, you’ll find structures from both Native Americans and the colonists. In other words, people have lived here for a long time.

But perhaps one of the coolest remnants left behind is a stone “calendar” cellar which has a tiny window that naturally illuminates it from the outside during the equinoxes. It’s mixed in with lots of other stone cellars that some archaeologists think are simply root cellars (where vegetables are stored in the cold seasons).

All the chambers/cellars seem to contain petroglyphs (prehistoric rock carvings). North of those, you’ll also find double stone circles made of large quarried stone. There are 21 of them laid end to end.

But what does it all mean?

Who built the site?

The most likely explanation is that this is a prehistoric Native American site that was later used by colonists as well. But the nature of the stone circles is reminiscent of medieval Irish structures. And that’s controversial because it would suggest that Europeans (perhaps Irish monks known as Caldees) may have made their way to North America long before Columbus. This is considered a fringe theory since there is no other evidence, linguistic or archaeological that would support it.

If you’re into fringe theories, there are also those who believe some of it was built by aliens. They use the occasional spikes in electromagnetic energy in the area caused by the quartz, granite, and magnetite rocks to forward a theory that it’s some sort of alien energy vortex.

Arrowheads, pottery fragments, and other artifacts make it certain that the site was also used by Native Americans and colonists. But was there another group of people who built some of the stranger aspects of the site?

It’s fair to argue that Native Americans that were wiped out built the mysterious structures. People clearly lived there for thousands of years, making it hard to tell where one group’s artifacts begin and end in the timeline.

There was once a Gungywamp Society that investigated the site, but they have now disbanded. — WTF fun facts