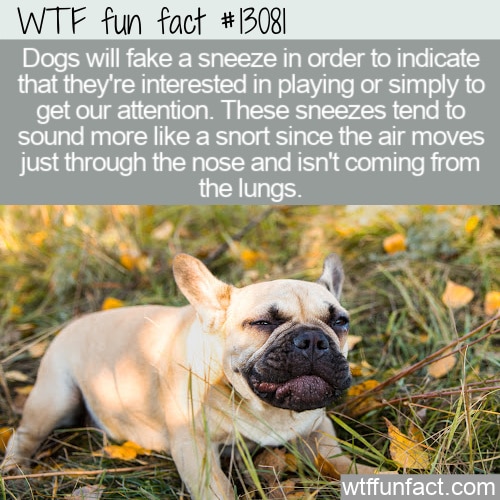 Did you know that dogs fake sneeze? We know our fluffy buddies can manipulate their environment to get more attention, but fake sneezing actually has a few different uses that we found interesting.

Why do dogs fake sneeze?

According to the American Kennel Club (cited below), dogs will fake a sneeze for play and communication purposes.

“Many dogs like to sneeze when they play with other dogs or humans. This ‘play sneezing’ is normal and something dogs use to show that they are excited and having a good time. Dogs will also use play sneezing to show that their behavior is only playful.”

When dogs play sneeze, they tend to curl their lips and create a wrinkle in their nose. These sneeze sound more like a short “snort” than a sneeze, since the air comes from the nose and not the lungs.

Your pup is watching you closely for signs of what will make you more empathetic and playful.

According to the AKC, “When a dog fake sneezes, they tend to watch you as they sneeze to make sure they’ve got your attention. They may even move closer and sneeze on or near you so you can’t ignore them.”

And dogs will even sneeze to communicate with one another. Sometimes, they’ll use it as a calming signal to let those around them know things are getting out of hand.

Of course, dogs can sneeze due to illness and allergies as well. So it’s important not to assume your dog is sneezing just because it wants to play. And dogs with compressed nasal passages, like pugs, will sneeze more often simply because of their physiology. This may require attention if it starts to happen more often since it can be indicative of breathing issues. — WTF fun facts