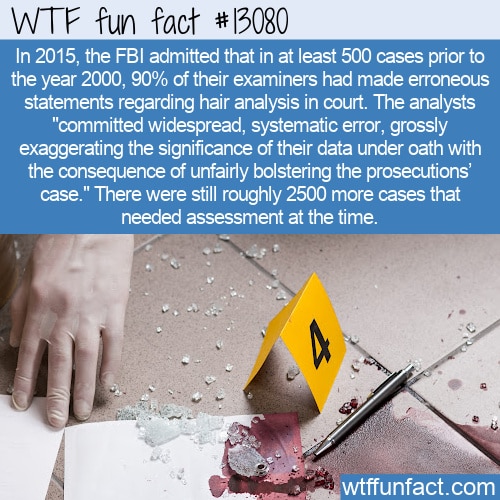 Crime scene analysis and the scientific investigation of crime scenes got a lot of attention once we started seeing them on television. More people than ever wanted to go into the field. But the science underlying some of these investigations is shaky at best. And in 2015, the FBI had to admit that at least one aspect of their crime scene analysis training was seriously flawed. Over 3000 cases needed to be rechecked for errors in hair analysis.

Sometimes we think the science on biological evidence left at a crime scene must be iron-clad or prove that a person was there. But that’s simply not the case.

In fact, it was the FBI, the Department of Justice, the Innocence Project, and the National Association of Criminal Defense Lawyers (NACDL) who jointly reported that:

Of the past errors, the statement also revealed:

“These findings confirm that FBI microscopic hair analysts committed widespread, systematic error, grossly exaggerating the significance of their data under oath with the consequence of unfairly bolstering the prosecutions’ case,” said Peter Neufeld, Co-Director of the Innocence Project, which is affiliated with Cardozo School of Law. “While the FBI and DOJ are to be commended for bringing these errors to light and notifying many of the people adversely affected, this epic miscarriage of justice calls for a rigorous review to determine how this started almost four decades ago and why it took so long to come to light. We also need lawmakers in Washington to step up and demand research and national standards to prevent the exaggeration of results in reports and in testimony by crime lab analysts.”

Sadly, many who were perhaps wrongfully convicted still had to wait for evidence to be reassessed.

“It will be many months before we can know how many people were wrongly convicted based on this flawed evidence, but it seems certain that there will be many whose liberty was deprived and lives destroyed by prosecutorial reliance on this flawed, albeit highly persuasive evidence. Just as we need lawmakers to prevent future systemic failures, we need courts to give those who were impacted by this evidence a second look at their convictions,” said Norman L. Reimer, Executor Director of NACDL. — WTF fun facts