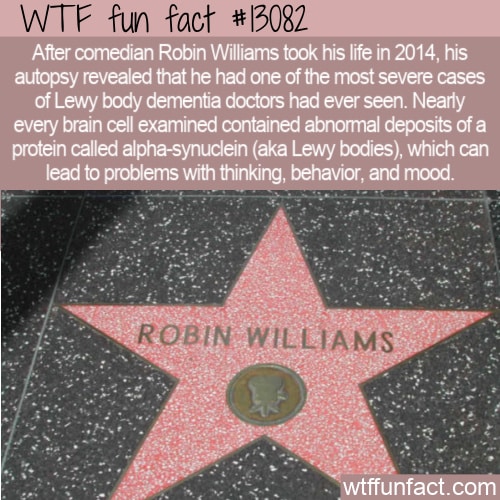 After comedian Robin Williams took his life in 2014, his autopsy revealed that he had one of the most severe cases of Lewy body dementia doctors had ever seen. Nearly every brain cell examined contains abnormal deposits of a protein called alpha-synuclein (aka Lewy bodies), which can lead to problems with thinking, behavior, and mood.

Most of the world learned of the comedian’s health struggle after his wife, Susan Schneider wrote an article (cited below) in the academic journal Neurology published in 2016.

“As you may know, my husband Robin Williams had the little-known but deadly Lewy body disease (LBD). He died from suicide in 2014 at the end of an intense, confusing, and relatively swift persecution at the hand of this disease’s symptoms and pathology. He was not alone in his traumatic experience with this neurologic disease. As you may know, almost 1.5 million nationwide are suffering similarly right now.”

She went on to explain that Robin Williams’ Lewy Body Dementia was an extreme case.

“Not until the coroner’s report, 3 months after his death, would I learn that it was diffuse LBD that took him. All 4 of the doctors I met with afterwards and who had reviewed his records indicated his was one of the worst pathologies they had seen. He had about 40% loss of dopamine neurons and almost no neurons were free of Lewy bodies throughout the entire brain and brainstem.”

Before his death, Williams had huge spikes in anxiety that led his wife to wonder if he might be a hypochondriac. But only later did she learn these were symptoms of the disease. “Not until after Robin left us would I discover that a sudden and prolonged spike in fear and anxiety can be an early indication of LBD,” she explained.

The winter before his death, he was suffering from other symptoms such as “paranoia, delusions and looping, insomnia, memory, and high cortisol levels.” None of the psychotherapy he received could ease his pain. Like many people with LBD, antianxiety medication and other psychiatric drugs may have made his symptoms worse.

After his suicide, Robin Williams’ wife got her answers.

“Once the coroner’s report was reviewed, a doctor was able to point out to me that there was a high concentration of Lewy bodies within the amygdala. This likely caused the acute paranoia and out-of-character emotional responses he was having. How I wish he could have known why he was struggling, that it was not a weakness in his heart, spirit, or character.” — WTF fun facts

Source: “The terrorist inside my husband’s brain” — Neurology