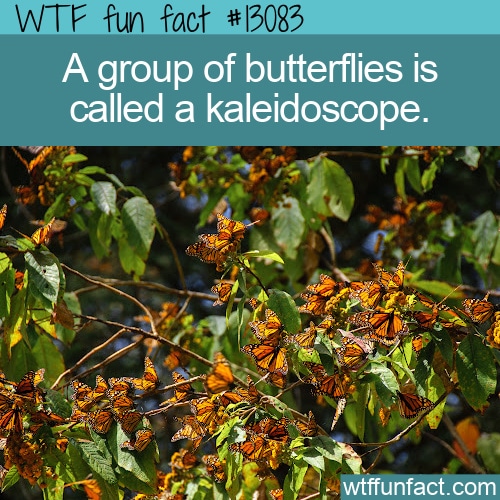 A group of butterflies is called a kaleidoscope. We love that! We’ve never actually seen more than one or two butterflies at a time, but now we know what to call them if we do.

You probably know that butterflies don’t start out life as beautiful flying creatures but rather as caterpillars. A group of caterpillars is called an army. It’s quite a biological and linguistic evolution to go through in one lifetime!

A kaleidoscope of butterflies

Of course, one may also call them a “swarm,” but that’s a lot less fun and it’s not really the official name. And no one really likes swarms of things.

Now, unless you go to a butterfly sanctuary, you may not have a great chance of running into a kaleidoscope of butterflies. They’re fairly solitary creatures. They even tend to migrate alone. If you’re near a source of food, that’s your best chance of seeing a kaleidoscope in the wild. Even though butterflies must come together to reproduce, they still don’t do this in groups. But they do use pheramones to attract one another as well as the colorful (dare we say, keleidiscopic) displays on their wings.

However, as far as monarch butterflies go, they do have a habit of clustering in trees at night. And those clusters are called a “roost.”

You may spot a roost in trees during migration if the weather gets cold or if predators are around.

As you may know, sadly, the migratory monarch butterfly (which is one of the most recognizable butterflies in the U.S.) is now endangered. — WTF fun facts

Source: “What’s a group of butterflies called?” — A – Z Animals