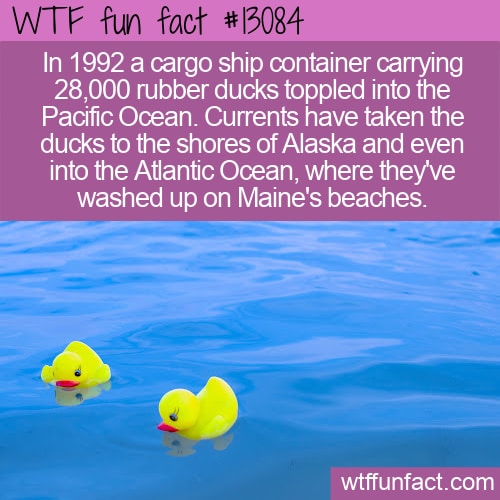 You’ve no doubt heard of the book Moby Dick. But have you heard of the incident referred to as Moby Duck? Let’s just say that while it involves an ocean, whales aren’t the main character in this story.

What was Moby Duck?

In 1992, a shipment of children’s bath toys fell into the North Pacific Ocean on its way from China to the U.S. The accident dumped 28,000 rubber ducks into the water, where they were carried far and wide by the currents. They’ve been found on the shores of Alaska and even in Maine (which means they make it all the way to the Atlantic).

More than a decade after the incident, a journalist named Donovan Hohn decided to see if he could track the ducks, enlisting the help of citizen beach-goers and oceanographers alike.

“I figured I’d interview a few oceanographers, talk to a few beachcombers, read up on ocean currents and Arctic geography and then write an account of the incredible journey of the bath toys lost at sea,” he told NPR’s Dave Davies on Fresh Air in 2011 (cited below). “And all this I would do, I hoped, without leaving my desk.”

He detailed the journey in a book called Moby-Duck: The True Story of 28,800 Bath Toys Lost at Sea and of the Beachcombers, Oceanographers, Environmentalists and Fools, Including the Author, Who Went in Search of Them.

While the idea of tracking the toys sounds cute on some level, Hohn also found out just how much plastic is on our oceans and the effects it has on the environment. Plastic doesn’t biodegrade, so those ducks will be around for centuries. Or at least pieces of them will.

While the ducks may photodegrade (due to sunlight), they simply fall apart into smaller pieces of plastic we can’t see. But that plastic still ends up inside wildlife and ocean garbage patches.

“We know that in the marine food web, there is an alarmingly elevated contaminant burden in species at the top of the food web,” Hohn said. “What role plastic plays in that is an ongoing area of study.” — WTF fun facts