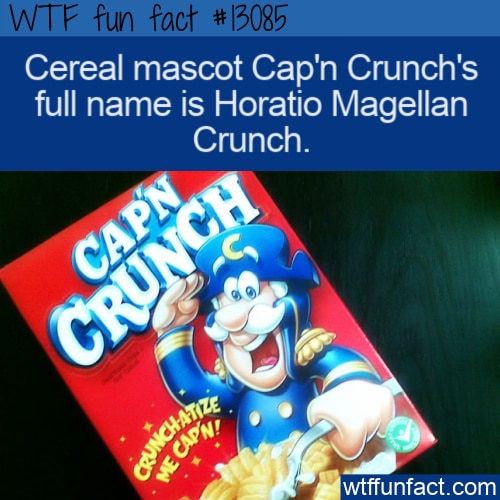 You think you know someone. All this time, we assumed that Cap’n Crunch was an uncomplicated cartoon cereal mascot. But there’s more to Horatio Magellan Crunch than meets the eye.

In 2013, the Wall Street Journal turned the cereal world on its head by revealing that an investigation into the origins of Cap’n Crunch had revealed his real name and rank.

Food & Wine Magazine (cited below) noted that the normally serious newspaper revealed a dark secret. That year, the paper wrote that “the legendary cereal icon’s status as a captain has come under fire… Cap’n Crunch only wears the bars of a Navy commander, not those of a captain. In the U.S. Navy, captains wear four bars on their uniforms, while commanders — one rank below captain – have three bars.”

Way to blow our minds.

You can’t handle the truth about Horatio Magellan Crunch

After the controversy broke, Cap’n Crunch went on Twitter to address the allegations.

“All hearsay and misunderstandings!,” @realcapncrunch wrote.”I captain the S.S. Guppy with my crew – which makes an official Cap’n in any book!”

He also insisted that “It’s the Crunch – not the clothes – that make a man.” The Navy would beg to differ.

In a tongue-in-cheek reply, Lt. Commander Chris Servello, director of the U.S. Navy’s news desk at the Pentagon revealed: “We have no Cap’n Crunch in the personnel records – and we checked. We have notified NCIS and we’re looking into whether or not he’s impersonating a naval officer – and that’s a serious offense.”

Then again, the so-called “Cap’n” wears a Napoleonic-era hat. Could he be French?!

He first debuted as a Quaker Oats Co. character in 1963, so it’s a little late to be fighting that battle. His official biography only tells us he was born on Crunch Island, in the Sea of Milk. We’re not sure which flag they fly there.

We do know that he commanded the S.S. Guppy and spent time near Mt. Crunchmore, but that raises more questions than it answers. — WTF fun facts