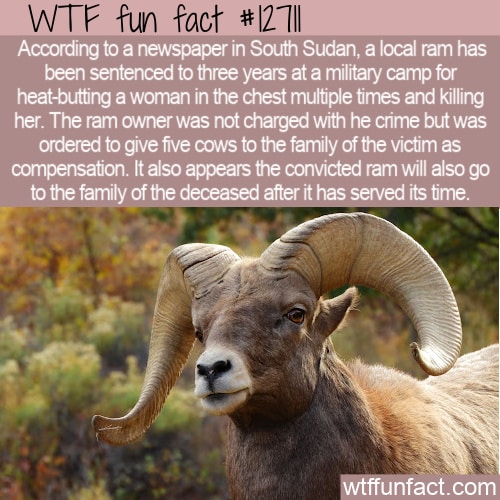 A sheep – a ram, to be exact – killed a woman in South Sudan by headbutting her in the chest. There aren’t many more specific details, but we’d rather not have them anyway.

People have been killed this way before. In fact, a 73-year-old U.S. woman was killed in Bolton, MA after being rammed while volunteering at a livestock farm in 2021. She was caring for the sheep alone in a pen when the animal repeatedly rammed her.

But the incident in South Sudan also made headlines because we’re not used to seeing other systems of punishment. In this case, the ram itself has been sentenced to three years in jail. Since it sounds like the animal was in human captivity, it’s unclear what that means.

According to LADbible, which published the story and cited multiple local sources:

“The ram was taken into police custody in South Sudan earlier this month after it attacked Adhieu Chaping, 45. She later died as a result of her injuries.” And, according to police, “The ram attacked by hitting her ribs and the old woman died immediately. So this is what happened in Rumbek East in a place called Akuel Yol.”

“Our role as police is to provide safety and separate fights. The ram was apprehended and currently under custody at a Police Station of Maleng Agok Payam...The owner is innocent and the ram is the one who perpetrated the crime so it deserves to be arrested then later on the case shall be forwarded to customary court where the case can be handled amicably.”

We’re not sure what it’s like to arrest an angry ram, but it sounds like a dangerous job.

The next step is to take the animal to a military camp in Aduel County headquarters in Sudan’s Lakes State for its prison sentence.

As the official said, the owner of the ram, Duony Manyang Dhal, will not be charged with a crime, but a local court determined a just punishment would be to give five of his cows to the victim’s family (who are his neighbors) as compensation.

Apparently, when the ram is released from detention, it will also be given to the neighbors.

It appears that this may be a photo of the ram (however, the news source called the 45-year-old victim an “old woman,” so we’re not sure we trust anything else after that):

Source: “Sheep Sentenced To Three Years In Jail After Being Convicted Of Killing A Woman” — LADbible