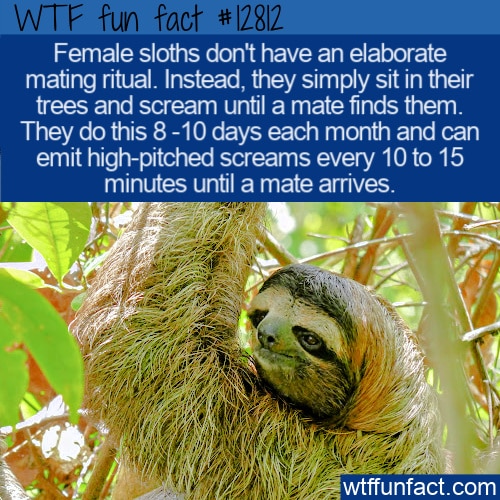 One thing we all know about sloths is that they’re slow. In fact, it’s pretty rare to witness a sloth moving at all, much less making the effort to mate. But female sloths have found a solution that allows them to find a partner with relatively little effort – screaming.

The sex of sloths

Three-fingered sloths, in particular, are hard to tell apart when it comes to determining their sex. According to Sloth Conservation (cited below) “Both sexes have a shaggy black mane around their necks. The appearance of the mane is unique to each individual, and it is not currently obvious if there is any sexual dimorphism in regards to its appearance.”

That doesn’t mean two-fingered sloths are any easier to tell apart. “In two-fingered sloths, distinguishing between males and females is notoriously difficult. This has led to some embarrassing mistakes at zoos and rescue centers, where two sloths thought to be of the same sex have been put into the same enclosure, only to produce a newborn baby some months later!”

One way you can tell male and female sloths apart is their mating behavior. It’s unknown if sloths have a specific mating season, but they’re fertile for about one week out of every month. And they let everyone know about it!

The Sloth Conservation Foundation confirms: “These vocalizations, or “screams”, sound like bird calls or shrill whistles. She will do this for eight to ten days every single month, with the vocalizations increasing in frequency until she is screaming every 10 to 15 minutes. The male three-fingered sloths get very excited when they hear this call and will go in search of the female making it.”

Source: “Sloth Mating: Not as slow as you think” — Sloth Conservation