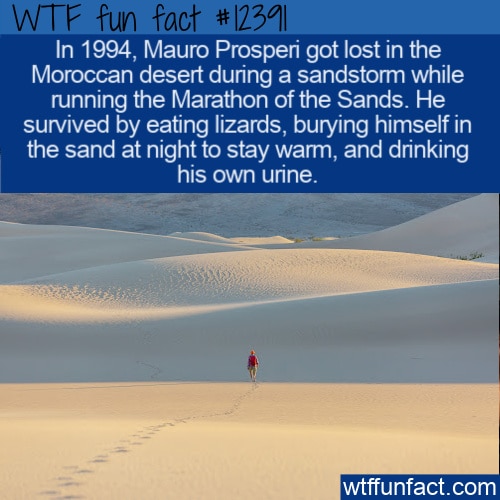 A 39-year-old former Italian police officer Mauro Prosperi decided to run in the 1994 Marathon des Sables. The 6-day race requires a 155-mile run through the Sahara Desert, but the former Olympic pentathlete felt up to the challenge.

However, a sandstorm hit the runners, and Prosperi got lost in the desert for 10 days. He survived by eating small animals such as lizards, drinking bat blood and his own urine, and covering himself in the sand at night to stay warm.

Fearing he would be declared missing and his wife wouldn’t be able to claim his life insurance for 10 years unless his body was found, he tried to cut his wrists. However, he was so dehydrated that his blood clotted immediately and he lived.

Telling his story to BBC News in 2014, he said: “My wife, Cinzia, thought I was insane – the race is so risky that you have to sign a form to say where you want your body to be sent in case you die. We had three children under the age of eight, so she was worried. I tried to reassure her. “The worst that can happen is that I get a bit sunburned.”

The race has changed since the debacle.

“These days the Marathon des Sables is a very different experience, with up to 1,300 participants it’s like a giant snake – you couldn’t get lost if you tried. But back in 1994, there were only 80 of us, and very few who were actually running, so most of the time I was on my own,” Prosperi said.

Source: How I drank urine and bat blood to survive — BBC News