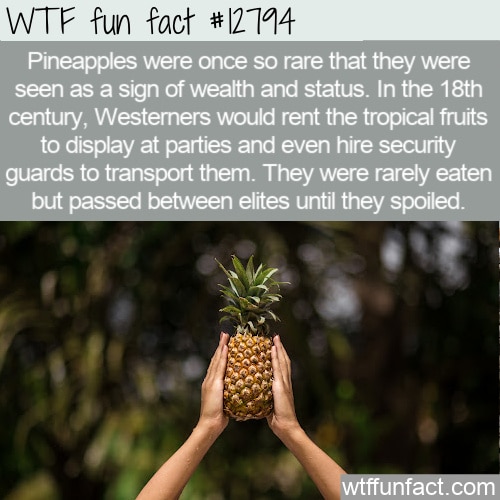 Pineapples were once luxury items in Europe and America. In fact, the fact that they were so exotic-looking and hard to grow made them worth hundreds or thousands of dollars (in today’s currency). Pineapple luxury seems absurd, but they were only grown in South America and the Caribbean in the 1800s. Even hothouses throughout Europe had a hard time producing proper pineapples.

According to Mental Floss, When the fruity fad made its way to America, “one pineapple could cost as much as $8000 (in today’s dollars). This high cost was due to the perishability, novelty, exoticism, and scarcity of the fruit. Affluent colonists would throw dinner parties and display a pineapple as the centerpiece, a symbol of their wealth, hospitality, and status, instantly recognizable by a party’s guests. Pineapples, however, were mainly used for decoration at this time, and only eaten once they started going rotten.

To underscore just how lavish and extravagant pineapples were, consider the pineapple rental market. The fruit evoked such jealousy among the poor, pineapple-less plebs that people could, if they wished, pay to rent a pineapple for the night. Before selling them for consumption, pineapple merchants rented pineapples to people who couldn’t afford to purchase them. Those who rented would take the pineapple to parties, not to give as a gift to the host, but to carry around and show off their apparent ability to afford such an expensive fruit!”

In the 18th and 19th centuries, artists often depicted pineapples in paintings of elites, and you could also find them emblazoned on napkins, china, and more. Pineapples graced finials, bed posts, fountains, teapots, and other high-class decor.

In 1900, James Dole started a pineapple plantation called the Hawaiian Pineapple Company in Hawaii, which later become the Dole Food Company. Eventually, he produced 75% of the world’s pineapples, and they went from being luxury items to food for the masses.

In the UK, importing pineapples from the colonies became common enough that nearly anyone could get their hands on one, ending their time as a status symbol.

According to the BBC (cited below): “Steamships started to import pineapples to Britain regularly from the colonies and the prices consequently dropped. And it wasn’t just the middle classes who could afford a pineapple, but – horror of horrors – the working classes could too.” – WTF fun facts

Source: “The rise, fall, and rise of the status pineapple” — BBC News