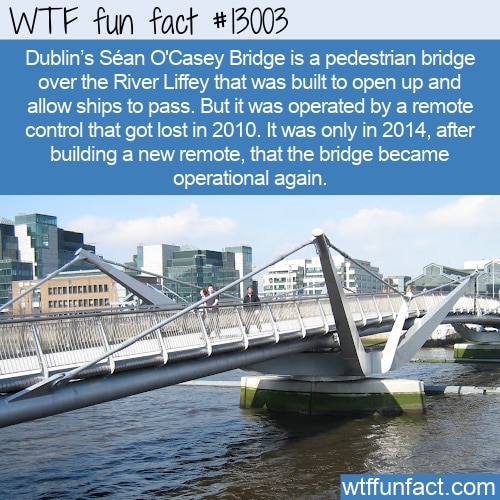 Fun Fact: “Dublin’s Sean O’Casey Bridge is a pedestrian bridge over the River Liffey built to open up and allow ships to pass. But it was operated by a remote control that got lost in 2010. It was only in 2014, after building a new remote, that the bridge became operational again.”

Pro tip: If you build a bridge to help pedestrians cross a waterway and the bridge needs to open up in order to allow ships to pass, make sure you create more than one remote control to operate the bridge. Otherwise, a mobile phone-sized remote could get lost for four years. And that can make things very inconvenient for shipping through the waterway. Just ask Dublin – they know all about it.

Irish news site TheJournal.ie (cited below) reported in 2014 that the Sean O’Casey Bridge over the River Liffey in Dublin was once again operational after engineers were able to create a new remote to operate the bridge.

Describing the bridge, the news site said, “The design includes two 44-metre-long arms, capable of swinging open when required. That operation is controlled by a hand-held remote device — but, as TheJournal.ie reported last year — that device went missing some years ago, meaning openings were no longer possible.”

The loss presumable occurred when the bureaucrats running the bridge moved offices.

Years of budget issues prevented a proper engineering review necessary to solve the problem, according to the news site. But in 2014, someone found the money to reprogram a new device.

Financial Advisor to the Authority John Crawley told TheJournal.ie: “Its not like a Sky box remote control.” The bridge remote required more than just an open and close button; it needed to be a secure system that no one could hack. Special engineers were required in order for it to be done right.

“An Irish-based firm carried out the reprogramming, and that aspect of the work cost around €1,800,” Crawley said. — WTF fun facts

Source: “The Celtic Tiger bridge that wouldn’t open because of a lost remote control” — TheJournal.ie